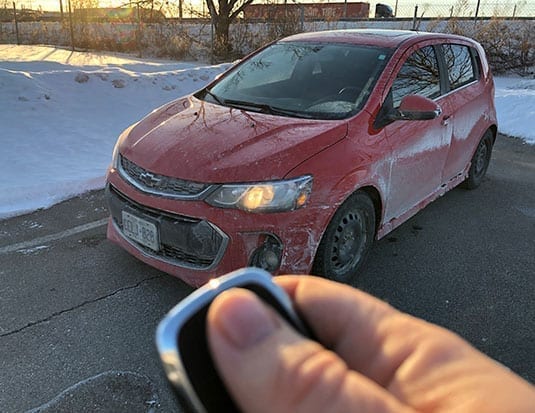 A convenience device can cause headaches on older vehicles.

Often seen as an added convenience and sometimes a gift, remote starters can make life easier for motorists, particularly for those of us that live in northerly climates.

While remote starters can be factory ordered on many vehicles today, a lot of cars and trucks are still delivered without them.

On these vehicles, aftermarket remote starters can be retrofitted and frequently are. Aftermarket remote starters tend to have a wide array of options that include one-way or two-way communications with a button or cellular phone activated via an app. Other features include temperature adjustment, security or alarm—the list goes on. Many consumers will see little more than the key fob used to start their vehicle and whether or not it does start, depending on how much they spend or which starter module they purchase.

What the consumer doesn’t see, however, is yet another electronic module wired into the electrical and starting system of the vehicle.

Traditionally, when we think of a vehicle starting system we think of the starter and battery as the primary components. When it comes to remote starters, we think of how these modules are wired into the electrical system and that they must directly draw from a power source (i.e. the battery) to enable the starter to turn over.

Therefore, in order to turn over the engine, the remote starter module must constantly require a power source. The power source is our vehicle’s battery that holds a charge but only obtains that charge while the vehicle is in motion and the alternator is charging the battery. When the vehicle sits for extended periods, the remote starter is still drawing electricity from the battery, though the device is not usually considered large enough for causing parasitic draw.

A parasitic draw is a power source continually requiring electrical current from another power source even though it may be sitting idle, in this example our remote starter. Most new vehicles can handle a parasitic draw at a rate of 25-35 milliamps or 0.025-0.035 volt/ohms of resistance on the battery that will take about two to three weeks to fully drain a battery.

Based on this information we can conclude that an older vehicle (especially one with an older battery) may not last two or three weeks but rather days or hours.

Reverting back to the remote car starter, we must also look at the lifetime of a computer module, especially one that must sit in equally cold temperatures and operate at the push of a button. From this it’s not hard to understand that the lifetime of a remote starter is limited and the module will fail after a certain period of time. When module failure occurs, our vehicle takes the brunt of the problem, with power surges and constant draining of the battery becoming a key culprit (parasitic draw).

Yes, remote starters offer added convenience, especially on a cold morning or evening in the winter, yet as the vehicle ages, they can become a major source of problems for both consumers and technicians. When that happens, the failure of a device that’s designed to start the car remotely means that car might not start at all.