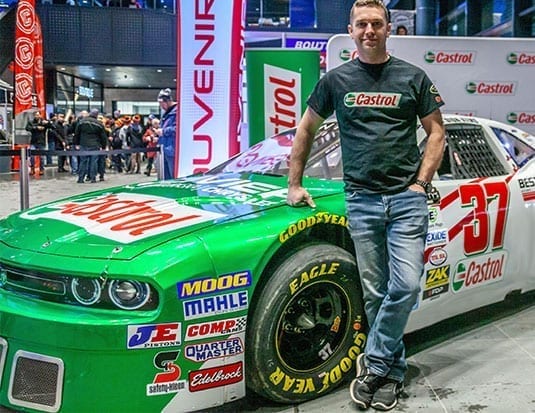 Simon Dion-Viens and SDV Autosport racing team announced that they have renewed their agreement with Castrol Canada for the next three years.

Dion-Viens will be an ambassador for Castrol Canada’s products. The partnership will allow him to be a part of a minimum of four races per season in NASCAR’s Pinty’s Series.

In a release by SDV Autosport, Dion-Viens says, “I have worked with Castrol Canada since I started my racing career, over 15 years ago. It’s always been a pleasure for me to collaborate with them. Over the years, we created an excellent relationship, and a winning partnership focused on the Quebec market. They’re as passionate as I am about racing and I am very proud that I can count on their support.”

The racer has won three Quebec GT championships in 2008, 2009 & 2010 and a Canadian Super Car championship in 2013 using Castrol’s synthetic motor oil and its ancillary product line. He says that being a mechanic himself, he understands the importance of selecting the right engine oil to ensure optimized performance and excellent reliability.

“Castrol Canada has partnered with several other racing teams throughout Canada and we have always ensured that we have a strong presence in the eastern Canadian market,” says Natalee Davis, Sponsorship Manager of Castrol Canada. “We understand the importance of having a high level of visibility in the province of Quebec and in the Maritimes. Simon has used our products since the beginning of his racing career. As he knows and trusts our products, we are proud to have him as our Ambassador both while racing and at our customer events”

Dion-Viens is thankful to Castrol Canada and all companies that support him in his NASCAR racing program. The driver of Castrol Canada’s #37 Dodge has been a part of car racing for 15 years now. His racing schedule for 2019 and announcements regarding other important collaborations are expected to be released soon.