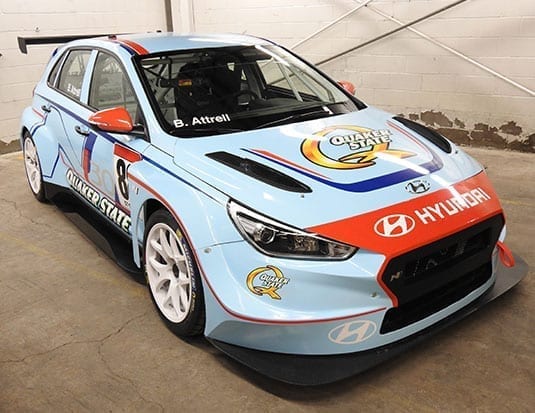 Quaker State will be the Official Motor Oil for this year’s edition of the Motorama Custom Car & Motorsports Expo.

As a high-profile exhibitor at Motorama, Quaker State will also showcase its brand and full line of motor oil products. Additionally, the company will be celebrating its long-running relationship with Gary “The Ironman” Elliott, a veteran Canadian Stock Car racer and Bob Attrell, Canadian Touring Car Championship driver.

Elliott and Attrell will have significant presence in Quaker State’s footprint at Motorama. To celebrate his relationship with Quaker State and to honour the crew members who have spent a full season on his crew in the sport. Elliott is to present a new paint scheme on his Late Model stock car. Attrell will showcase a i30 N TCR Hyundai race car on display, his new vehicle, that has won the 2018 FIA World Touring Car Cup championship secured by Gabriele Tarquini with Hyundai Motorsport.

Quaker State completes 46 years of association with Gary Elliot this year, having first appeared on his car in 1974. As per Elliott, his relationship with Quaker State is the longest continuous driver-corporate sponsor relationship in the history of motorsports. The racer says he does not have any intension of slowing down. He will be competing a full season in his Late Model and OSCAAR Modified. Since June 1987, Elliott has competed in a whopping 817 consecutive events to date.

Elliott, who turns 72 years old this season, says, “I might scale things back a bit in the future, when I get older.”

He further adds, “I’ve lost zero passion for racing. And I’m so lucky that my health is good. And when I think about Quaker State, I’m absolutely honoured to have carried their logo on my car all these years. I love their products and I’ve always been proud to have the opportunity to represent Quaker State at racetracks and all the appearances we do.”

Elliott’s Quaker State race car has been regularly featured at Motorama and other car shows over the decades.

This year marks the Quaker State’s debut as a sponsor and exhibitor at Canada’s largest indoor automotive and motorsports show.

Co-promoter Greg MacPherson, on behalf of Motorama, says, “Quaker State’s long-running sponsorship of Gary Elliott is legendary. We’re honoured that they’re taking such a prominent role at Motorama. Gary has some neat things planned for his paint scheme for 2019 and it’s great that he’s chosen to debut it at Motorama. And beyond just their booth presence, in their capacity as The Official Oil of Motorama, Quaker State will provide complimentary product to all of the automotive exhibitors in the show and participate in the awards presentations.”