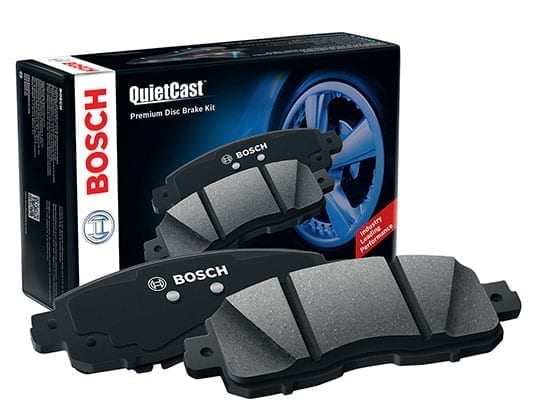 Bosch announced the expansion of its braking and filter product lines in February, providing coverage for over 45 million vehicles.

The coverage includes popular brands such as Mercedes-Benz, Volvo, Kia and Honda, among others. Covering over 45.8 million vehicles in operation in the U.S. and Canada, the new SKUs are designed to offer proper fit, form and function for specific vehicles that require brakes and filter components.

Bosch has added 19 new SKUs to its QuietCast Brake Pad and Blue Disc Brake Pad product lines this month. The new part numbers offer extended coverage to late-model domestic, European and Asian vehicles in operation, such as the 2015-2016 Mercedes-Benz C300, 2016 Kia Optima, 2017 Nissan Titan and 2018 Ford Expedition, among others.

Bosch’s 8 new SKUs from its QuietCast line extend coverage to around 1.3 million vehicles in the U.S. and Canada. In addition to synthetic lubricant with all applications, they also include a hardware kit on select applications. Bosch has designed this line of brake pads for technicians who work on all makes and models.

Bosch’s 11 new Blue Disc Brake Pad SKUs cover 1.1 million vehicles in the U.S. and Canada. Bosch has engineered these pads with the aim of delivering quality and performance, including the use of multi-layer shims to provide better noise dampening. In a release by the company, Bosch says that these brake pads are ideal for the shop owner who intends to provide optimal value for their customers.

Covering nearly 29 million vehicles in operation in the U.S. and Canada, Bosch has added 25 new HEPA Cabin Air Filter SKUs. The new parts have been created to trap microscopic pollutants such as pollen, mold and common allergens. Bosch has developed and tested the filters to meet High Efficiency Particulate Air (HEPA) standards based on test standard ASTM D2986. The filters cover several vehicles, including the 2007-2015 Nissan Rogue, 2001-2010 Hyundai Elantra, 2010-2012 Ford Fusion and 2013-2019 Infiniti JX35, among others.

Bosch has also added nine new SKUs to its Workshop Cabin Air Filter Line. They cover more than 16 million vehicles in operation in the U.S. and Canada. Besides providing strong engine protection, the Workshop Cabin Air Filter has been designed to offer an 80 percent efficiency rate in capturing dirt, dust and other environmental contaminants from entering the heating and air vents of a vehicle. The new numbers cover vehicles such as the 2014-2019 Cadillac Escalade, 2015-2018 Ford Edge, 2013-2018 Mazda 3 and 2014-2019 Jeep Cherokee.