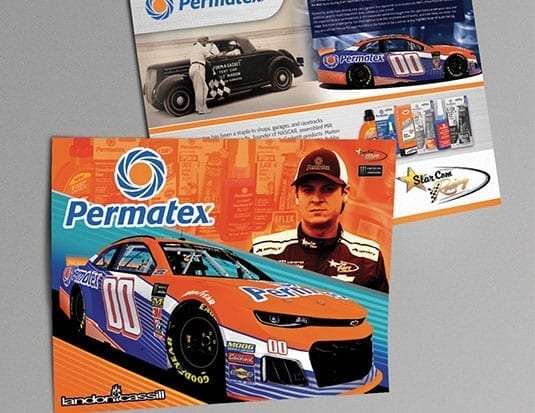 Permatex hosts a Meet-and-Greet with its NASCAR driver Landon Cassill on February 15 from 9:30 am to 11:00 am.

The event is being held before Cassill pilots Permatex’s StarCom Racing 00 Camaro in the 61st edition of the Daytona 500. It will take place at Advance Auto Parts in Daytona Beach.

Besides meeting Cassill, fans also have the opportunity to get free signed Permatex and racing merchandise, including hero cards. Fans also have the chance to challenge Landon Cassill to a race in NASCAR Heat 3 and Forza Horizon 4 on PlayStation 4 in a video game trailer present on the site.

Cassill debuted in professional race car driving in 2008 and was named the Xfinity Series Sunoco Rookie of the Year. He has competed in the Monster Energy NASCAR Cup series for 10 seasons ever since. A 4th place finish at Talladega in 2014 is his best career result. With the 2019 season, Cassill steps into the second year of his association with StarCom Racing.

Paco Agrafojo, Permatex Director of Marketing, announced the event.  “We are extremely excited to put this Meet-and-Greet together with Permatex, Landon Cassill and Advance Auto Parts. Permatex’s sponsorship of StarCom Racing’s 00 Camaro represents the company’s return to NASCAR racing and the Daytona 500. We are excited to introduce the Permatex brand to a new generation of race fans and also showcase our new products to our loyal customers,” he said.

Permatex had been an active NASCAR supporter and title sponsor from 1948 to 1977. Inaugurated in 1966, the Permatex 300 was the second race on the NASCAR schedule to be named after a corporate sponsor.