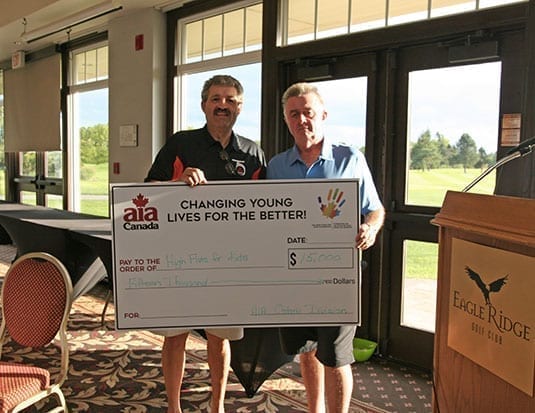 In remarking about how far this tournament has come since its inception, tournament organizer Andy Murphy said that nine years ago, there were only about 30 golfers and the way this tournament has grown is testament to the hard work and effort of everybody that’s involved in putting this event together.

Sponsorship this year reached an all-time high, with 61 different companies taking part, while $15,000 was raised during the course of the day with the proceeds going to support High Fives For Kids.

Since 2005, High Five for Kids has raised more than half million dollars to help children in need. Said AIA Ontario Division Chair Joe Mercanti, “if there is a registered charity in your community that needs help we want to help them. If we can make a difference for one child, we have done our job. This is our charity and it’s yours to support your local communities.”

Given the success of the tournament this year, the future for both this event and the charity it supports looks exceedingly bright, both next year and beyond.