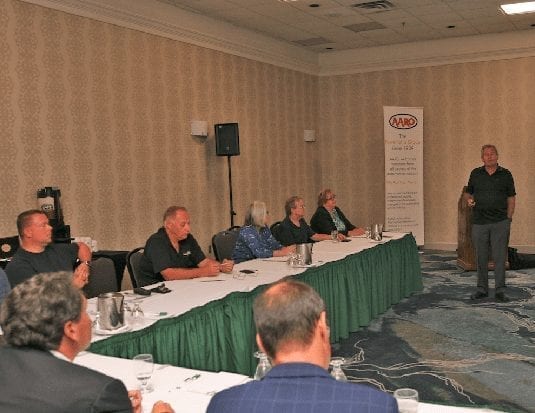 The Automotive Aftermarket Retailers of Ontario (AARO) announced the formation of a new task force, designed to help service providers get the right repair information at the right time, when diagnosing and fixing vehicles.

AARO member John Cochrane, of Cochrane Automotive, said that in developing closer ties with NASTF over the last several years, it became evidently clear that in the U.S., things are moving forward. “NASTF is an organization on the move,” said Cochrane “and has developed a relationship where it works harmoniously with OEMs. And now we (AARO) have a relationship with NASTF.”

Over the next several months, the task force will be formalized with members attending two NASTF meetings during the course of the year. By the time of AARO’s next Symposium event—scheduled for January 19, 2019—the task force will be up and running with NASTF members conducting information sessions at the Symposium and providing the latest developments regarding service repair information.

To support the program, Cochrane said AARO will develop a budget and that information will be offered to AARO members as a value-added service.

Members from AIA Canada attended the meeting and expressed interest in the initiative, as well as the potential benefits such a task force could have not only in Ontario, but across Canada.

Stay tuned to CarCare Business as bring you further announcements and developments surrounding this new and historic development in the service repair industry.