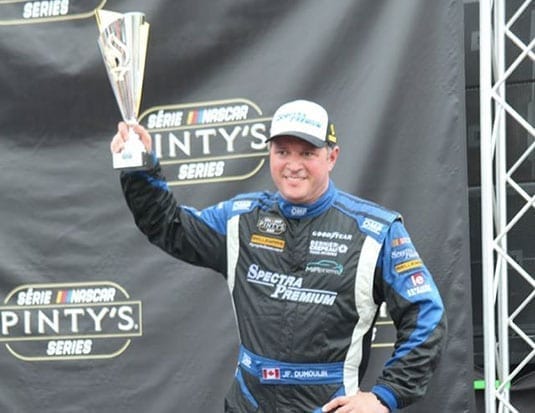 Explains JF, “It’s our first podium with the Spectra PremiumTM high-performance radiator, we are really proud! To earn this podium, we had to fight in the leading group for all the duration of Pinty’s Grand Prix of Toronto.”

JF’s podium adds to the Spectra PremiumTM high-performance radiator’s stellar tally up to the mid-season—it has found its way on each NASCAR Pinty’s series podium for the first half of the 2018 season. At mid-season, the Canadian-manufactured radiator has accumulated nine podiums in seven consecutive races thanks to the efforts of the radiator’s early adopters: Jean-François and Louis-Philippe Dumoulin plus Alex Tagliani.

“Congratulations to Jean-François and the #04 Spectra PremiumTM team for this amazing result in Toronto. Following a few races marred with mechanical issues at the beginning of the season, we are proud of JF’s inspiring display of grit and resolve to fight his way back to the leading pack,” said Jason Best, Senior Vice President, Aftermarket, Spectra Premium Industries. “As a manufacturer, we could not be more pleased with our radiator’s performance for the first half of this season.”