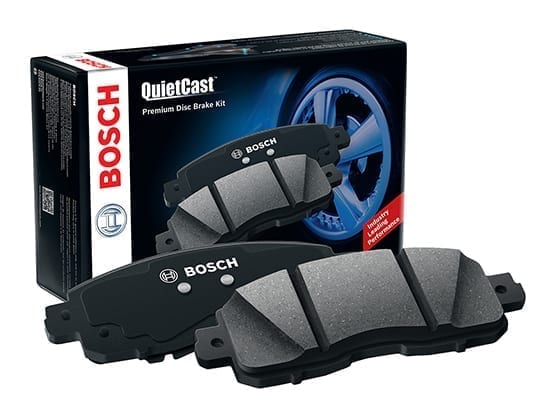 Bosch has added new parts coverage for vehicles from Subaru, Volkswagen, Hyundai, Chevrolet and more in the months of May and June.

The new SKUs cover more than 6.3 million vehicles in operation in the US and Canada for select vehicles needing replacement brakes, engine management components, starters and alternators.

Eight new SKUs have been added to the Bosch QuietCast™ Brake Pad and Bosch Blue Brake Pad product lines. The new part numbers extend coverage to more than 1.7 million late-model Domestic, European and Asian vehicles in operation in the US and Canada including the 2015-2016 Audi A3, 2015-2016 Chevrolet Colorado, 2017 Hyundai Santa Fe, 2015-2016 Volkswagen e-Golf and more. The new part numbers include synthetic lubricant with all applications and a hardware kit on select applications.

15 new SKUs have been added to the Bosch Blue Disc Brake Pad product line, featuring OE-style multi-layer shims that provide superior noise dampening. The pads are designed to deliver quality and performance and are ideal for the shop owner who is looking to provide customers with the best value.

Bosch has announced the addition of a new engine management component, providing late-model coverage for 2.1 million vehicles in operation in the US and Canada. The new Bosch Ignition Coils deliver high voltage surge to the distributor and offer guaranteed fit and function. The part is a direct replacement for SMP UF670.

Seven new part numbers have been added to the Bosch Rotating Machines product line, including six SKUs for remanufactured alternators and one SKU for remanufactured starters. The new SKUs extend coverage to more than 1.6 million late-model Domestic and Asian vehicles in operation in the US and Canada. These vehicles include the 2017 Ford Escape L4 1.5L, 2010 Hyundai Elantra L4 Cyl. 2.0L, 2005-2009 Audi S4 V8 Cyl. 4.2L and more.