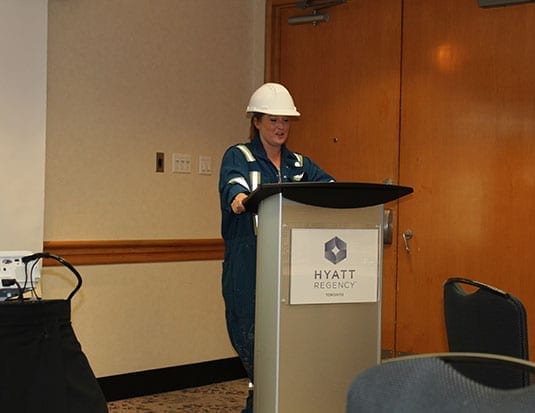 Over two hundred strong women (and some men) flooded the King Ballroom at the Hyatt Regency Hotel in downtown Toronto for the two-day 2018 Women’s Leadership Conference. AIA Canada and Women in Auto Care from the U. S. did a superb job… the conference was full of learning experiences and there was a multitude of dos and don’ts to take with you from this experience.

The Conference started off with the Human Resources Symposium and the main speaker at this sector was Laura Shea, now a specialist in Health and Safety in the Workplace at the port of Halifax. She described how she got started in the ‘the man’s world’ and worked on the pipe lines in Western Canada.

Laura was followed by Heidi Haufner who spoke about hiring and how to find a fit! A panel discussion followed featuring Amy Ecsedi, Brenda Miller, Sharon Eggert from Mevotech and Anna Sabucco, Sil’s Auto Care Centre discussing what’s important in hiring a woman.

Then it was on to the main conference — “Engage to Elevate” and Tammy Techlenburg, President, Women in Auto Care introduced the first speaker—Annie Hotte of Uni-Select Inc. where she holds the position of Chief People Officer.

Kathy Korman Frey is an entrepreneurial women’s leadership person with many titles under her belt—‘The Hot Mammas Project’ for one and she also teaches leadership at Geo. Washington University.

Maryscott (Scotty) Greenwood, CEO Canadian American Business Council and her guest, Mandy Rennehan, the founder of Freshco (not the grocery store!), a very talented and successful Canadian woman who took her construction business to the U.S., discussed the fact that ‘trade is everything’ and trade jobs are professional jobs… it takes a lot of skill to do the job correctly!

The founder and CEO of the Lead Yourself First Institute, Michelle Ray reminded us to never underestimate the power of influence; don’t judge people too quickly; perception is your reality and that you can create amongst other excellent suggestions.

Fotini Iconomopoulus is an advisor and trainer and her specialty is ‘Negotiating’. She told us that in a negotiation you must conquer fear which most people have when being confronted.

Petrina Gentile from the Globe & Mail is an award winning automotive journalist. She covers cars in Canada and interviews many celebrities about their rides.

Next up was one of our Canadian heros—Laura Stacy, a professional hockey player who made the Canadian Women’s team as a rookie and went to the Olympics. She advises that we get back up after we have been pushed down and dream big… engage with each other.

Amy Jo Martin says ‘Why Not Now? She suggests you not give yourself an ‘out’; leverage adversity; live the ‘talk’, identify your value and don’t take it personally among so many other tips.

Commander Kelly Williamson of the Royal Canadian Navy is the Director Navy Public Affairs. She graduated from the Royal Military College; can drive a ship; was assigned to Haiti and Afghanistan amongst other regions so she has served in war areas. Kelly told us leadership is about people—one team, one fight!

In summing up the whole conference—GREAT!! Well done everyone!