29TH ANNUAL SLAPSHOTS FOR A CAUSE RAISES $10,000 FOR CANCER RESEARCH 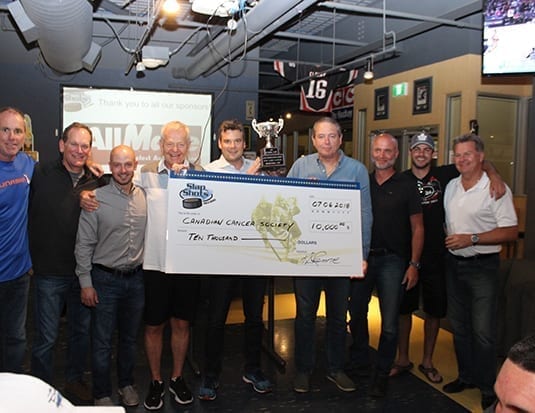 On June 7th members of Canada’s automotive aftermarket took to the Powerade Centre in Brampton, for the 26th annual Slapshots for a Cause hockey tournament.

This annual event is made up of four teams of aftermarket professionals who battle it out on the ice, all in the name of charity. In addition to putting their hockey skills to the test, the teams raise funds for the Canadian Cancer Society.

The tournament was originally started back in 1990 by Brad Shaddick, General Manager, Canada for Federal-Mogul Motorparts. At that time, Shaddick figured there were enough guys in the aftermarket who enjoyed playing hockey that he could put together a couple of teams to play some hockey and have some cold beer and wings and make it into a social event. The first game was held at Conestoga College in Kitchener on an Olympic-sized ice pad.

“There is no way we’d be playing on an Olympic-sized ice pad today,” joked Shaddick.

After the first year, some of the guys wanted to keep it going, and it was suggested they turn it into a charity event. “We chose the cancer society because cancer affects more people and families than any other affliction,” explained Shaddick. “We took a vote, and that was the choice we made.”

A few years into the annual tournament a gentleman by the name of Lube Koval approached Shaddick and offered to sponsor the ice pads. With this sponsorship, Slapshots for a Cause was able to contribute additional funds to the Canadian Cancer Society.

“This was a very generous offer, and Lube continued to sponsor the ice pads for several years, and then, very tragically, Lube became sick and passed away and very graciously, his widow continued to sponsor us. We have a trophy for the winning team, and when Lube passed away, we name it the Lube Koval Memorial Trophy,” explained Shaddick.