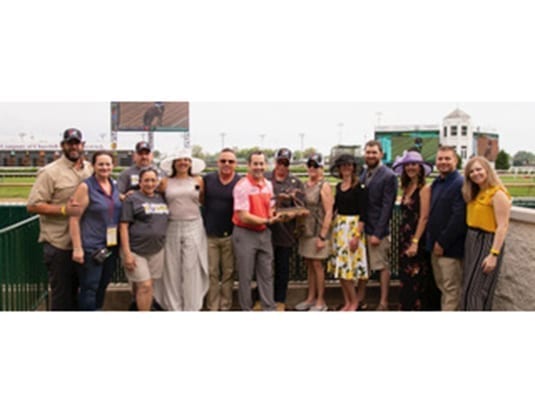 Jason Kozak of Mr. Muffler and Auto-Wares, Inc. customer out of Macomb, Michigan is driving back home in a Torch Red Corvette.  “It was such an amazing opportunity, and I am so thankful to Auto Value!  I’ve always been a Corvette guy and winning the red stingray convertible is my dream car! Can’t wait to get it back to the motor city and cruise Woodward.  Thank you so much to the Washbish family and your team, you have been amazing hosts!”

The once in a lifetime experience for these professional technicians started when 25 grand prize winners and their guests touched down Thursday and were greeted with a private welcome reception at the Louisville Marriott Downtown.

On Friday the attendees traveled to Bowling Green, Kentucky to visit the National Corvette Museum which serves as a pilgrimage destination for Corvette owners, enthusiasts, and gearheads alike. Tensions and excitement rose as the grand prize winners realized that they were just a day away from possibly winning their very own piece of Americana.

The party continued in Louisville at the Frazier History Museum courtesy of Valvoline. Guests sipped cocktails and enjoyed delicious Louisville fare in the speakeasy Champagne Parlor while a character actor took the captive audience through prohibition era Louisville with historical storytelling and showmanship.

Saturday the group experienced a full day of thoroughbred racing at Churchill Downs from their very own Winner’s Circle Suites.  At the track, race number five’s winning mount, First Spring, was awarded the Auto Value Cup by several of the excited trip members.

The day concluded with the special Corvette Giveaway ceremony at the Kentucky Derby Museum.  All grand prize winners had a chance to win one of three brand new Corvettes provided by Auto Value as they each unwrapped a die-cast replica Corvette. When the commotion settled twenty-two people were holding a yellow die-cast Corvette as a memento to their VIP trip of a lifetime. This left the three winners holding a white, black or red miniature replica of the Corvette they just won. The three Corvette winners also won $25,000 each!

The Kentucky Horsepower Corvette Giveaway technician sweepstakes ran from September 1-November 30, 2017.  The lucky grand prize winners received an entry into the sweepstakes with every eligible $150 purchase.  There were over 201,000 total entries during the promotional period.

For additional detail on this sweepstakes, visit khpcorvettegiveaway.com.