Is Your Business Threatened? 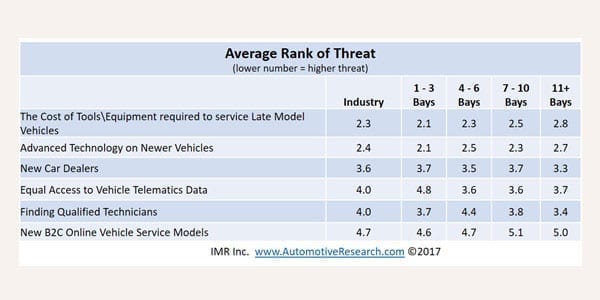 Do you have an idea what could be detrimental today or in the future?

We wonder what your thoughts are on what most threatens your business as an auto repair shop, as well as possible future threats. Do you think new car dealers are your biggest threat? Do others think the same way?

I recently read a report from a research company—IMR. IMR had gone out and asked several general automotive repair shops just what they thought of the six current and future threats they were asking about that might be detrimental to their business. This report was done quite recently. IMR has many published findings on its website, and you could likely find another one that’s interesting to you.

The answers were pretty interesting and depending on the number of bays the shop had, it increased or decreased some of the threats.

Advanced technology and the cost of the tools and equipment that were now needed to be able to service the late-model vehicles were almost tied as the number one threat. But then it showed that as the shop increased in size, the threat of the cost for the new equipment and tools decreased. The study revealed that shops that had 4-6 bays and 11 or more bays believed the number one threat was advanced technology. So, different thoughts for different shops.

In the average rank of threats, equal access to vehicle telematics data came in at number four. But further study showed that one in five shops thought it was a #1 or #2 threat. Over half of the smaller (1-3 bay) shops deemed it to be the least threatening. Interestingly, shops with 4-6 bays and 7-10 bays thought equal access to telematics data was really more of a threat than trying to find a qualified technician.

When asked about new business to consumer (B2C) online vehicle service models, only 15 percent of the shops rated it as a #1, #2, or #3. Most of the repair shops classed that threat as a #5 or #6.

The chart provided by IMR showed there were six threats that those interviewed had been asked about.

1. The cost of tools/equipment required to service late-model vehicles.

Do you recognize any of the above as threats to your business now or possibly in the future? If so, are you going to act on them?

Our thanks to IMR for letting us use this data.