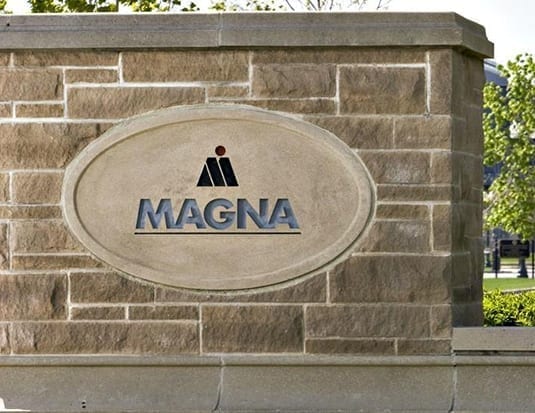 Net income of $503 million was the same as reported a year earlier, Magna said in a statement. Operating income before taxes was $670 million, compared with $692 million in the third quarter of 2016

Third-quarter income at Getrag plants fell $20 million. The profitability of joint ventures in Asia was also down due to lower volumes there. The company, headquartered in Aurora, Ont., reports earnings and sales in U.S. dollars.

Sales in Europe rose 14 percent to $2.5 billion in the third quarter. Meanwhile, the bulk of Magna’s sales are still in North America, where sales were down five percent to $4.6 billion.The company said it still expects North American sales to be between $19.2 billion and $19.6 billion in 2017, nearly double the outlook for European sales. Third-quarter sales in Asia rose five per cent to $576 million.

Magna CEO Don Walker said light vehicle production in North America will likely continue to fall over the next few years. He didn’t say how that might affect his company’s business plan, which is currently being tweaked.

Magna counts General Motors Co., Volkswagen AG, BMW and Ford Motor Co. as its biggest customers. It also assembles cars under contract from some automakers, and that business was brisk in the quarter. Complete vehicle assembly sales increased 55 percent in the third quarter of 2017, largely reflecting the launch of the BMW 5-Series at Magna’s assembly facility in Graz.

Walker said he was pleased with the third-quarter results. “Our product breadth combined with complete vehicle design and engineering capabilities uniquely positions Magna to be a supplier of solutions,” he said in a statement.

Walker said the future of NAFTA is affecting business decisions. “The whole thing with NAFTA is still up in the air. Anybody that is contemplating big investments long-term is waiting or is biased to invest in the U.S. until there is an outcome,” Walker said. “I can’t think of any changes we’ve made [to our business plan]. We’re just going to wait and see what’s coming up.”

He’s also keeping an eye on Bill 148, which hasn’t yet come into law in Ontario. The bill includes a mandatory $15 Cdn./hr minimum wage, requires employers pay part-time employees the same wage per hour as full-time workers, and requires companies to give employees more advanced notice to changing schedules. The bill could affect investment decisions, Walker said.

“I’m not sure what the government is trying to do,” he said. “We’re waiting to see what happens in a couple different areas.”