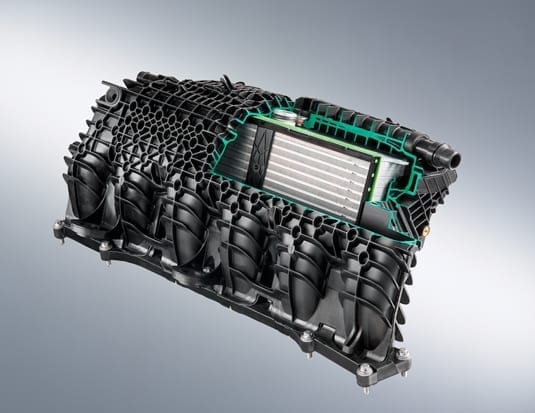 At the Frankfurt Motor Show this year, MANN+HUMMEL celebrated the world premiere of the first intake manifold with a fully integrated intercooler.

The system evenly distributes the temperature and is able to withstand the highest loads.

More consistent and effective intercooling, resulting in up to three percent reduction of CO2 emissions, are the advantages convincing more and more vehicle manufacturers to switch to indirect cooling systems. In comparison to direct intercooling, a reduced charge air volume and a quicker build-up of boost pressure improve the engine response. MANN+HUMMEL, the filtration expert from Ludwigsburg, has now raised this technology to a new level. At the 2017 Frankfurt Motor Show, the company celebrated the world premiere of the first intake manifold with a fully integrated intercooler.

The new system exhibits all the advantages of indirect charge air cooling and requires a lower number of components, in comparison to stand-alone concepts, which work with separate components for the intercooler and intake manifold. This reduces the number of interfaces and the handling costs for automobile manufacturers. In addition, a lower pressure drop and the smaller charge air volume serve to improve the engine response.

With full integration, the cooler is completely enclosed by the intake manifold shells. This gives the whole system a higher stability in comparison to mounted solutions, as there is no sealing surface to the outside. The system enables excellent temperature distribution with a maximum temperature difference of two degrees Kelvin over all six cylinders. In this process, the whole system has to withstand high temperature differences between the air inlets and air outlets of up to 90 degrees Kelvin.

The seal consisting of two components between the cooler and intake manifold shells is characterized by good resistance to chemicals and low leakage values. It is made from a plastic frame in the particularly strong polyamide 6 with a 35 percent glass-fiber component (PA6 GF35) and an elastomer seal in fluorinated rubber which has a good resistance to temperature and media. A positive-locking fit keeps the polyamide and elastomer firmly and securely together.

Absolute charge pressures of up to 2.7 bar place high requirements on components. The large surfaces of the plastic shells are subject to considerable stress. Using modern simulation technology, internal prototype construction and intensive testing, the engineers at MANN+HUMMEL were able to enhance the right design through the use of ribbed plastic shells to ensure the highest stability, while also minimizing weight.

Guiding ribs in the assembly ensure an even air inflow to all the cylinders through an optimum airflow. At the same time, the component design serves to minimize pressure drop. The use of hot-gas welding enables more narrow welding seams, which are also stronger. A positive side effect is the increased cleanness of the component due to the fact that with this process there is no fluff resulting from friction.