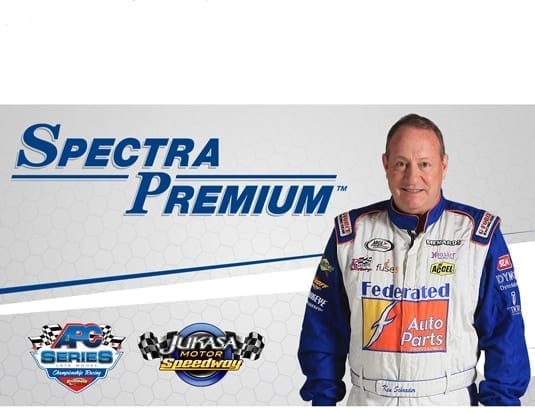 A press release from the APC United Late Model Series has announced that Spectra Premium will sponsor Ken Schrader’s Pro Late Model at the grand re-opening of Jukasa Motor Speedway on August 26-27.

“We have two races at the former Cayuga Speedway, the deal back in 2002 with all the Cup drivers coming in after our race at Bristol,” said Schrader. “And also back in the mid-1990s when we Finished 2nd in an ACT race to JR Hanley. It’s neat to see a facility reopening, and not wasting away which unfortunately happens a lot. From everything I have seen it is quite the investment and making the place look nice. When you take a place that was already nice and make it nicer it is going to be classy.”

The sponsorship of Ken Schrader further expands Spectra Premium’s commitment to motorsport. The company introduced its motorsport specific NSCR100 radiator early this year and sponsors other drivers, including Jean-Francois Dumoulin and Alex Tagliani who currently compete in the NASCAR Pinty’s Series.