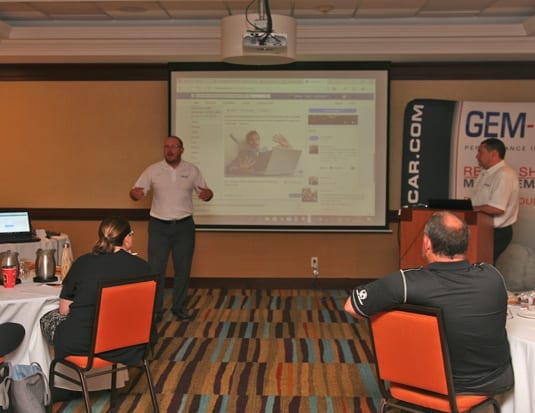 On May 30-31, GEM-CAR hosted its 2017 Convention at the Fairfield Inn & Suites by Marriott Toronto Airport, at 3299 Caroga Drive, Mississagua, Ont.

The objective was to give attending service providers and staff members the opportunity to learn about new updates from GEM-CAR’s shop management software as well as real world solutions to help further improve business operations and efficiency.

GEM-CAR President and CEO, Mathieu Brunel provided an overview of some of the latest developments, including new e-learning options as well as features such as an iPhone/camera allowing users to link photos and videos to quotes, a full screen agenda function plus POS personalization.

Joanna Evans, Partner Development Manager for CARFAX, talked about the partnership with GEM-CAR and how the MyCARFAX app can help shops using GEM-CAR software build retention by enrolling customers in the MyCARFAX program.

“We found that a lot of users (consumers) want to find shops that are close to them and this app lets them do that,” said Evans. “It’s a tool designed to promote better vehicle maintenance.”

Rob Ingram, owner of Eldon Ingram NAPA AutoPro in Stratford, Ont., provided some real world examples of how GEM-CAR has enabled his shop to significantly increase both revenue and profitability, while making the business operate more efficiently.

Ingram said the shop has developed a system whereby it uses quick codes for both parts and labour, saving look up time.

He talked about the need to develop matrices that allow shops to track monthly costs, as well as labour hours and parts prices. By doing so it will allow a shop to determine its monthly breakeven figure.

Ingram discussed applying a labour cost matrix tied to the age of the vehicle, using an example of 0.1 labour hours for every year over 3 years old. “The more labour you sell, the more parts you can sell,” he said.

And that in turn allows greater investment into the business. He noted that 1.9 more hours sold per work order equals $32,361.09 in profit per month.

He noted that besides doing your homework, it also takes a shop management program that’s adaptable to make it work. “What we like about GEM-CAR, is the fact that it’s easy to use and you have the ability to make it your own.”