Spectra, Dumoulin Get Ready for Delaware 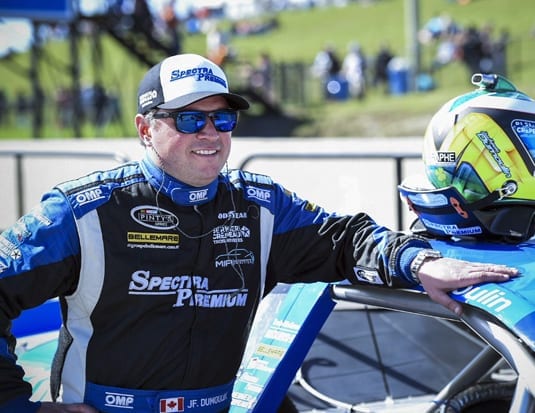 With the second round of the 2017 NASCAR Pinty’s Series fast approaching, Jean-Francois Dumoulin and the Spectra Premium Bernier Crépeau / Groupe Bellemare / MIA team are preparing to build on their strong start to the season.

So far, both in testing and competition, the #04 Pinty’s series Dodge racer has shown considerable potential with Jean-Francois Dumoulin.

At Canadian Tire Motorsports Park on May 25, Dumoulin was running as high as fourth when conditions began to worsen making the track very challenging for those drivers running on slicks.

Yet despite the odds, Dumoulin and the team finished seventh overall, a respectable showing for the car’s first event.

Dumoulin praised the efforts of the team and said the car, equipped with the Spectra NCR 100 series radiator performed well.

Delaware Speedway, which opened in 1952, is one of Canada’s most historic and longest operated oval tracks and making it an ideal venue for Dumoulin and to really put the #04 Dodge Challenger through its paces.

2017 also marks the first time since 2013 that the NASCAR Pinty’s Series has included Delaware on its race schedule, making the May 3 race at this half mile course a highly anticipated event.