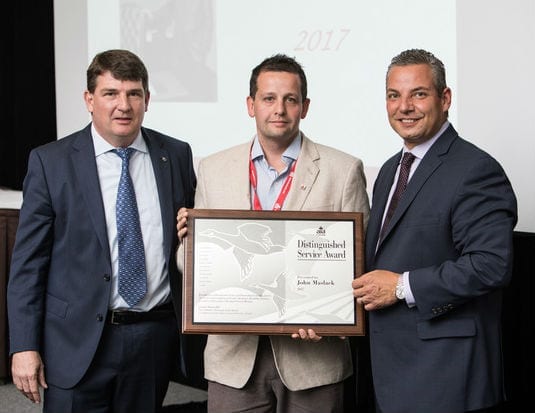 The 75th AIA Annual General Meeting took place at the Hilton Meadowvale in Mississauga on May 17th. It was a day for the yearly AIA reports, introduction of new Board members and recognition for those leaving the Board.

But it was also a day for awards… the two big awards AIA present every year… the very prestigious Distinguished Service Award and the YES Award.

The Distinguished Service Award went to John Maslack, Founder and President of Maslack Supply headquartered in Sudbury, Ontario. A great businessman, John has also been very committed to and involved in his northern community winning several honours and award for this.

He was not able to be present for the Award ceremony, but his grandson, Curtis Roy accepted the award on his behalf. He did a great job ending his speech with, “As my grandfather turns 91 on Sunday, a time when the majority of people have been long retired, John’s mind remains completely focused—as it has been for almost 60 years—on different strategies to grow our business and trust me, he’s not done yet!”

Jason Best of Spectra Premium was awarded the Young Leader of the Year (YES) Award for his leadership in business. Best mentors employees and other industry personnel thus helping to mold Spectra-Premium’s next leaders. He lends strong support to his community coaching children’s tee ball and soccer. In his thank-you speech he sincerely thanked his Mother and Father as well as his wife for their strength and support in his career.