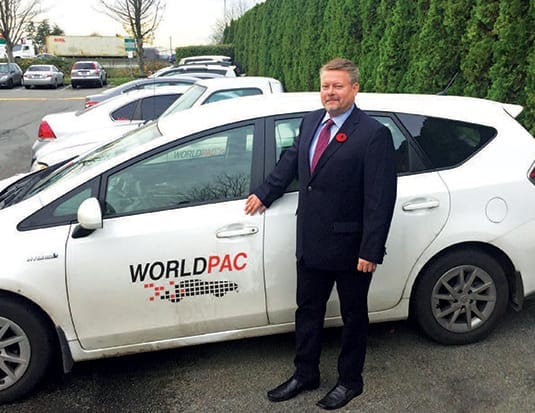 Jason Yurchak, based In Vancouver, B.C., is Vice President of WORLDPAC Canada in charge of operations.

Jason Yurchak didn’t start out to have a career in the Automotive Aftermarket, but that’s where he’s been since 1993. He took an Electronic Technology program in college, during which time he purchased a 1979 Lada from a friend. That often led him to the wrecking yard for spare parts—he liked working with cars. After finishing his program, Yurchak got a job with a small import parts store and began to learn the industry.
After that, he went to a Volvo dealership, eventually becoming Parts Manager. When a friend opened an independent repair shop, he ran the front end of the business. In 1993 he was offered a job with Metrix (purchased by WORLDPAC in ’99) and six weeks later was asked to move to B.C. as salesperson for the new branch. He eventually became Director of Sales and Operations for Western Canada. In 2011 he was appointed Vice President, Canada tasked with continuing expansion and growth. Today WORLDPAC Canada has 24 branches across Canada.
Executing the plan
“My main focus is on continued sales growth and the overall operation of our Canadian division,” says Jason. “But none of this growth and expansion could have been accomplished without the efforts of the entire WORLDPAC team—Drivers and Warehouse staff all the way up to Sales and Operations Management. It’s one thing to have a plan, but without a team to execute it you can’t accomplish your goals, and I truly believe that we have one of the premier teams in the industry. I wouldn’t be in my position without them.”
On being asked what opportunities and challenges face the Aftermarket today, Yurchak told us that he sees great opportunities for the Aftermarket. “As new car sales have rebounded to near record highs, there aren’t nearly enough service bays in the dealership network to service the amount of vehicles on the road today.”
Aftermarket challenges
Yurchak believes the biggest challenge facing the aftermarket is the ability of Independent Service Providers to service the increasingly complex vehicles that have come into the market over the past 10 years. Without a dedication to training and investment in the proper diagnostic equipment, many shopscould find themselves in limbo.
“For example, on many late model BMWs and other European vehicles, you need to ‘tell’ the onboard computer there’s a new battery or it will overcharge the new battery— it thinks the old one is still there. At WORLDPAC, we’ve been at the forefront of specialized technical training for years and are accredited by many Import OE nameplates to provide factory level training to the aftermarket. The entire aftermarket—distributors and suppliers alike—need to make sure we all step up to ensure the Independent shops of today and tomorrow can get the proper training to ensure the continued health of the aftermarket,” says Jason.
Yurchak has recently added another job to his portfolio: Chair of the new B.C. Division of AIA Canada. He and Mike Rutherford of OK Tire discussed the need for a B.C. Division. They felt a voice for the aftermarketwas needed in the province. They worked with AIA and put together a growing division that currently focuses on promoting the OEM2TECH website.
This connects independent service providers with a panel of executives from different Aftermarket Distributors, Suppliers and Franchise Chains to find out what they’d like to see from AIA, plus their challenges. And as Jason wisely says, “While some of us may be competitors during the day, we agree that without healthy service providers, the entire aftermarket is at risk.”