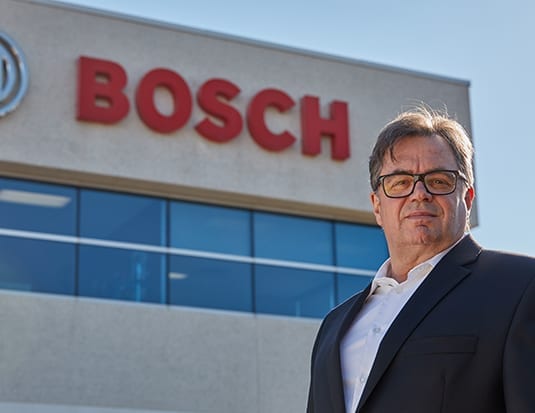 There’s a revolution taking place and it revolves around vehicle steering. Today, electric power steering systems can be found on over 90 percent of passenger vehicles, compared with 40 percent a decade ago.

So what does this mean for the automotive aftermarket? Quite simply, if service providers are not used to working on vehicles with electric power steering, they need to become accustomed within the next five years, as changing a hydraulic steering assembly will largely become a thing of the past.

Automobile manufacturers, through legislative requirements and a desire to innovate, are constantly seeking new ways to improve vehicle performance, safety and packaging.

By eliminating the need for hydraulic, engine driven power steering pumps and replacing them with electric motors, OEMs are able to reduce the weight of a typical passenger vehicle steering system by 20 percent while also delivering improved vehicle performance and reduced fuel consumption.

Robert Bosch began its involvement with electric power steering systems in 1999, through a joint venture with ZF Steering.

In 2015, Bosch acquired a 50 percent stake of ZF, bringing the company entirely under the Bosch umbrella. With its worldwide presence and deep OEM ties, Bosch is able to bring a unique set of solutions to the automotive aftermarket when it comes to next generation steering systems.

Bosch currently offers three different types of Servolectric steering systems for passenger vehicles, one with a column mounted servo unit: one with a servo mounted on a second pinion on the steering rack, and one that features a paraxial servo unit.

The column mounted servo system is designed primarily for smaller vehicles, such as sub compact, compact and sports cars—those with a steering axle load of up to 1,000 kg (2,200 lbs). Bosch specifically developed this system for vehicles that require lower steering effort. By mounting the ECU and servo directly on the steering column, and using a system where they are connected to the steering rack and pinion gear via an intermediate shaft (with sensors and torsion bar mounted next to the worm gear), the result is a neat and compact installation.

The second pinion mounted servo system is designed primarily for midsize cars—those with an axle weight of 1,200 kg (2,600 lbs). By placing the servo unit on a second pinion, the drive motor and the drive unit can be physically separated, allowing for an independent drive pinion ratio and more performance-optimized steering input.

Additionally, this design allows for improved vehicle crash protection and the ability for the servo unit to turn 360 degrees on the axis of the rack and pinion via a tuned worm gear (which converts torque from the electric motor into assistance torque that is then transmitted to the steering rack). A special worm gear spring damper, innovative fixed bearing and overload safety device between the helical gear and drive pinion are incorporated to promote maximum durability and reliability.

The Paraxial servo unit is designed for larger and luxury vehicles, including SUVs and pickups—those with an axle load of up to 1,600 kg (3,200 lbs).

Traditionally, most larger and luxury passenger vehicles have tended to use recirculating ball instead of rack and pinion steering systems, which deliver higher steering effort as well as smoother, quieter operation. The Bosch Servolectric Paraxial system uses an ECU controlled electric motor in conjunction with a toothed-belt drive and recirculating ball gear system, with the ball mounted in a channel integrated with the ball recirculating nut.

Because the servo unit can be flexibly positioned on the Paraxial system, it enables maximum space efficiency when it comes to installation on the vehicle.

In addition to providing optimal steering solutions for different types of vehicles, the Bosch Servolectric power steering systems also serve as a platform to advance vehicle technology and safety.

As Niall Davidson notes, some real world benefits include consistent steering feel and input whether the engine is running or not. “Next generation stop/start systems incorporate a coasting feature,” he says. “With first generation systems that only shut the engine off when you came to a stop, it didn’t matter whether you had hydraulic or electric power steering. But when you are coasting, a hydraulic system doesn’t have the ability to provide steering assist.”

And, as vehicle technology further advances, systems like Bosch’s Servolectric, which use ECUs and sensors to control steering operation, pave the way for increasingly automated driving features, ranging from lane departure and automatic evasion, all the way to fully autonomous steering operation.

Going hand-in-hand with these technological advances at Bosch is a robust training program that places a very strong emphasis on product and technical knowledge and repair processes.

By leveraging its considerable expertise at the OE level, Bosch is able to ensure that through its aftermarket parts and service network, independent installers and technicians can be placed in the best possible position to effectively diagnose, repair and service the next generation of vehicles.