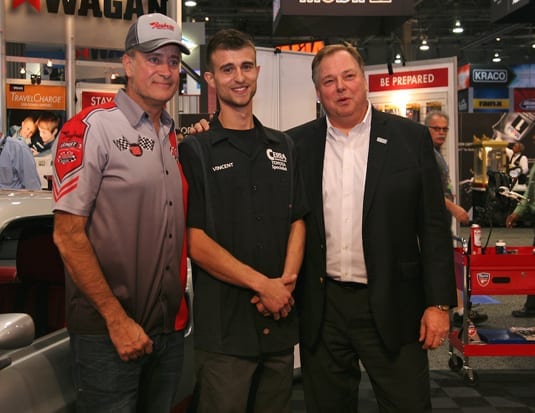 Vincent Cerra of Cerra Automotive in Greensburg, Pa. hit the jackpot as the lucky winner of the Raybestos 1969 Mustang SportsRoof, during a special reception at the Automotive Aftermarket Products Expo (AAPEX) in Las Vegas on November 2.

As part of his grand prize, Cerra received a trip to Las Vegas to attend AAPEX. Renowned builder Jeff Schwartz, who directed the Raybestos Mustang restoration project at his shop, Schwartz Performance in Woodstock, Illinois, was on hand to congratulate Cerra on winning the one-of-a-kind iconic muscle car. Also in attendance for the festivities were Cerra’s father Sal and brothers Sal, Nick and Mike.

“We congratulate Vincent as the grand prize winner of the custom-built Raybestos ‘69 Mustang and thank him for installing the best in brakes,” said Kristin Grons, Marketing Manager for Brake Parts Inc. “As a professional technician working in the family business, we know Vincent appreciates the unmatched quality of the parts and workmanship that went into restoring this outrageous muscle car that he will now call his own.”

Painted in classic colours and striping reminiscent of a period Trans Am car, the Raybestos 1969 Mustang features a 5.0 litre 32-valve Coyote V-8 engine similar to the one found in the late-model Boss 302.