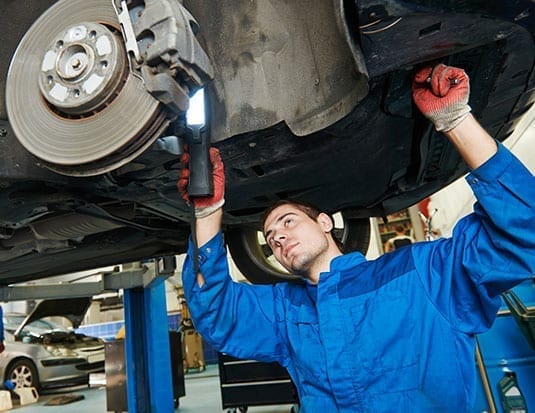 AARO has teamed up with ABS Friction to have this hazardous material banned from brake pads and linings imported into Canada.

You may be surprised that we still have asbestos in brake linings and pads being imported into Canada despite health warnings.

An automotive technician is exposed to a variety of hazards in the repair shop: Slip and fall accidents caused by spilled motor oil, cuts and bruises from mishandling tools, and also exposure to asbestos from replacement car parts that contain the toxic mineral.

According to data from Statistics Canada, imports of asbestos-related items rose to $6 million in 2015 from $4.9 million in 2013. The bulk of these goods consisted of asbestos brake linings and pads, which hit $3.6 million in imports in 2014, a seven- year high. The Association of Workers’ Compensation Boards of Canada reported 61 claims for the deaths of auto, truck and bus mechanics stemming from asbestos-related diseases.

Persisting problem
Automotive Aftermarket Retailers of Ontario (AARO) executives met with Rick Jamieson, President and CEO of ABS Friction Inc. in Guleph, Ont., back in July to tour the operations of the company’s production facility and hear more from the manufacturing side about the products coming into Canada. We were shocked to hear that even today, we still have products being imported with asbestos.

Canadian technicians are frequently unaware that products containing asbestos are still allowed to come into Canada. We learned that ABS Friction Inc. has been manufacturing brake components here in Canada with zero asbestos in their brake pads.

No further action
In 2012, Bill 51, the Highway Traffic Amendment Act (Brake Pad Standards), 2012 was a private members bill proposed by Liz Sandals, MPP for Guelph, Ont. Bill 51 went to its second reading and then was sent to a standing committee. Unfortunately, no further action was taken. Currently, there are no brake product standards in place in Ontario for replacement brake pads.

AARO has teamed up with ABS Friction Inc. to have asbestos banned in Canada. As an association, the safety and health of our automotive technicians is important to us. We look forward to meeting with government to develop strong regulations and industry standards that will provide all automotive technicians, drivers and production workers who install and replace aftermarket brake pads with knowing that NO ASBESTOS is being used in brake linings and pads.

Canada has imported more than $100 million in asbestos brake pad and linings in the past decade. This translates into hundreds of thousands entering the Canadian market each year.