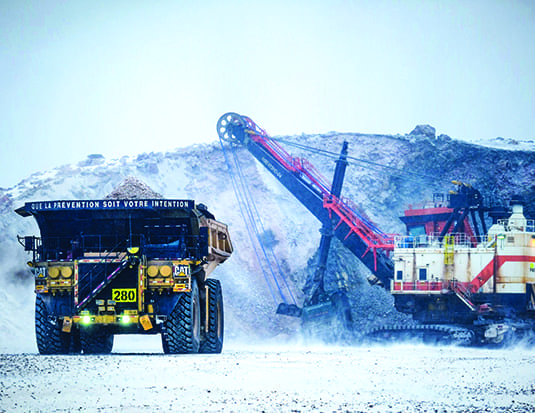 With more than 2,700 units at five different sites, ArcelorMittal is among the very few North American mining companies that manage their fleet of vehicles and equipment based on the total cost of ownership.

In full expansion mode, the ArcelorMittal Mobile Asset Management Division, headed by Frédéric Dubé, was created only this past June. He began by culling less desirable assets, initiating several right-sizing initiatives, assessing requirements and taking inventory of equipment. When you consider the cost of acquiring mining graders, their 10-year lifecycle, and their cost—$1 million USD—the margin for error is slim to none.

This explains why this fleet management expert identified the replacement cost and attributed a numerical sequence to each unit. Previously, each business unit managed its own equipment. Now, in less than five minutes, he can produce a detailed portrait of the fleet and estimate the cost of replacing equipment or parts.

Based in Quebec’s North Shore region, the company is integrated “from mine to buoy,” explains Dubé. “Both mines (Mont-Wright and Fire-Lake) are used for extraction,” he explains. “The raw iron ore is processed at the Mont-Wright site. Afterwards, it’s transported by rail to our Port-Cartier facility where it is transformed into value-added products at our pelletization facility, before being shipped out by boat.”

In addition to having its own rail network, the company also has the largest privatively owned port in Canada. The very diversified ArcelorMittal fleet includes drills, 100- to 400 tons hauling trucks, cable and hydraulic excavators, loaders, tractor trucks, excavators, locomotives, cars, and even emergency vehicles. Not to mention, the more than 250 light-duty vehicles, mostly American models, used to transport staff to the various sites.

With such a high level of specialization and operations running around the clock, maintenance is mostly managed in-house. The fleet team is responsible for vehicle procurement, replacement, and lifecycle assessment, but each sector is responsible for maintaining its vehicles. Keeping them running is essential when you consider that, at current market rates, with 26 million tons extracted annually, each hour of downtime can generate losses of over $350,000!

In this industry, used equipment is resold on the international market. Sometimes other mining companies or specialized equipment resellers acquire the used equipment, but certain components are conserved. The engine of a 400-ton truck is worth around $1 million, and it must be replaced after 15,000 hours of use.

To acquire the knowledge required to Colossal Fleet implement this management process, Dubé took two years to complete the continuous learning program offered by NAFA, which enabled him to integrate the new skills he acquired into the company’s organizational structure. He obtained his CAFM (Certified Automotive Fleet Manager) certification last April.

While talking with other experts, he also learned that under the Mining Act, he could recoup sales taxes if the vehicles were registered for “off-road” use. With sales taxes amounting to over $100,000 for a hydraulic shovel, he quickly realized the benefits of registering vehicles.

“We’re steelmakers,” he explains. “Our mining sector operations are relatively new, about ten years old, and I think that’s what allows us to innovate more.”

If he succeeds in getting his fleet to the level he is aiming for, Dubé can reduce the cost of producing iron ore while increasing the lifespan of each unit. In this 4.0 industry era, he intends to prove that sometimes it’s preferable to prematurely sell or recondition equipment, than to live with the consequences of a “too late” replacement. When you look at the determination and commitment of the ArcelorMittal team, you realize that their impressive vehicle fleet isn’t the only asset that is colossal…