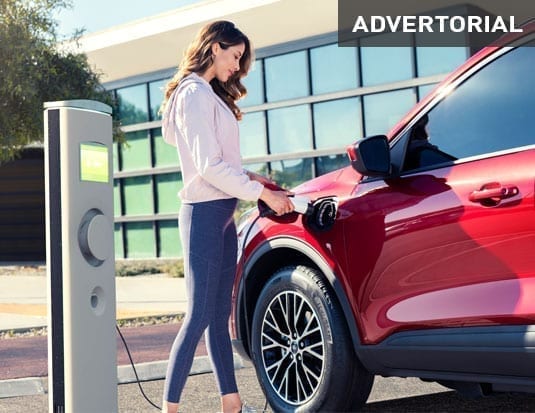 Ford’s approach to electrification is sure to make drivers want to drive EVs in the future.

Many automakers have embraced electrification, each with their own approach to market. At Ford, the road to electrification is built upon two key principles—the power of choice, and the belief that vehicle owners should not have to compromise, or settle, for a vehicle that offers less, just because it’s electrified.

Ford Escape
The Escape illustrates the commitment Ford has made to offer customers options. “We are giving people the power of choice,” explains Gonzalo Contreras, Vehicle Line Marketing Manager, Ford Motor Company of Canada, Limited. “So when you look at Escape, as an example, we have four different powertrains. We have the 1.5-litre, which is a three cylinder with cylinder deactivation. That means it can run on two cylinders, so you get great fuel economy. We have the 2-litre if you want power and towing ability and torque. And we are adding the hybrid again.

“The Escape Hybrid is not our first Hybrid SUV,” Contreras adds, “We were the first in the world to offer a hybrid SUV with the 2005 Escape. We have brought it back, and now we also have the plug-in hybrid, which offers a gas engine, along with a battery.”

“There’s no compromise,” Contreras stresses. “In the past, batteries used to be located in the trunk, which meant that your cargo area was limited. Now, with the batteries underneath the passenger seats, the interior is the same as with a gas-powered vehicle. You can’t tell the difference.”

In fact, because you can adjust the second-row seats six inches forward or backward on the Escape, with the sats moved all the way back, Contreras says you get best in class second-row legroom. But if you need more cargo space you can move it forward for maximum cargo capacity.

Impressive range
When the plug-in version of the Escape comes to market next March, it should lead the pack when it comes to range. “We’re estimating a range of 48 km on electric only,” Contreras says, “which would be best in class.”

The hybrid version of the Escape (available now exclusively in Titanium trim) boasts equally impressive numbers. “We’re estimating a best in class range of 880 km on a single tank of gas,” Contreras adds. “We expect it to get great fuel economy numbers in the 5.5 L/100 km range, and that’s great news for fleets because it will dramatically bring down their cost of operation.”

Ford is making it easy to opt for the hybrid by offering a MSRP that’s only incrementally higher than last year’s model. “Compared to the 2019 Titanium model, we’re moving to an all-new and redesigned 2020 Titanium hybrid with many class exclusive technologies, for only $350 more,” Contreras says.

Lincoln Aviator
At Lincoln, electrification moves upscale with the all-new Aviator. The gas version of the Aviator is just starting to arrive at dealerships now, while the PHEV, which started production in September, should be seen in stores in the near future.

Lincoln has taken the idea of choice, and “no compromise” to new levels by actually offering customers more when they opt for a PHEV. “At Lincoln, it’s not simply about offering a more environmentally friendly vehicle; it’s about offering performance,” explains Jim Rideout, Lincoln Product Plans Manager, Lincoln Canada.

He adds, “The average consumer thinks that when you electrify a vehicle, you’re also sacrificing performance. But our strategy, starting with the Aviator, is that you can have it all. You don’t have to make any sacrifices.”

The all-new Aviator is a prime example of how Lincoln offers more. The gas-powered model comes with an engine that’s rated at 400 hp and 415 lb. ft. of torque. But the PHEV, which comes with the same 3-litre V6 engine, offers 494 hp and 630 lb. ft. of torque—all thanks to electrification.

The “no compromise” philosophy includes no loss of cargo or passenger space. “You’re not sacrificing anything,” Rideout explains. “If you were to take the gas Aviator and put it beside the PHEV, you would not be able to tell the difference when looking at the interior. There is zero sacrifice, because the batteries are actually underneath the vehicle within the frame of the vehicle.”

Externally, only small differences in appearance would give away the fact that one Aviator is gas powered, and the other is a PHEV. “Our data shows that our clients don’t want to announce to the world that they’re driving a PHEV,” Rideout explains. “They made the decision to go with a PHEV, but they don’t feel they need to promote it. That’s why there’s no nomenclature identifying it as a PHEV. It will simply be known as the Grand Touring model, which is exclusive to the PHEV.”

Electrified future
While Rideout won’t comment on new models in the Lincoln lineup, he says Lincoln will continue to offer electrification on future vehicles “whenever a significant refresh of a model is planned, or if we introduce an all-new model.”

Future plans include vehicles that may be offered only as an electric vehicle, without a gas version. Or Lincoln may introduce both gas and electrified versions of a vehicle. It all depends on what makes sense for the vehicle and the market at the time. “We’re looking at the full breadth of electrification, which includes hybrids, PHEVs, and BEVs,” Rideout adds.

Ford’s vision is clear, and it’s one that promises the power of choice, and a “no compromise” philosophy that is going to make it easier for drivers to want an electrified vehicle in the future.

“Ford is delivering on its $11.5 billion investment in electrified vehicles with an allin push on hybrids and plug-in hybrids that bring new capabilities and features to customers on high-volume vehicles, including the all-new Ford Explorer, all-new Ford Escape, and a hybrid F-150 that is on the way,” concludes Dean Stoneley, President and CEO, Ford Motor Company of Canada, Limited.

“But hybrid-electrics are just the tip of the iceberg,” Stoneley adds. “We’re also preparing to roll out a portfolio of all-electric vehicles inspired by our most iconic products, starting in 2020 with our all-new, all-electric, Mustang-inspired SUV. And because our customers are at the centre of all that we do, Ford will also deliver services that help create a hassle-free and easy transition to an EV lifestyle.”