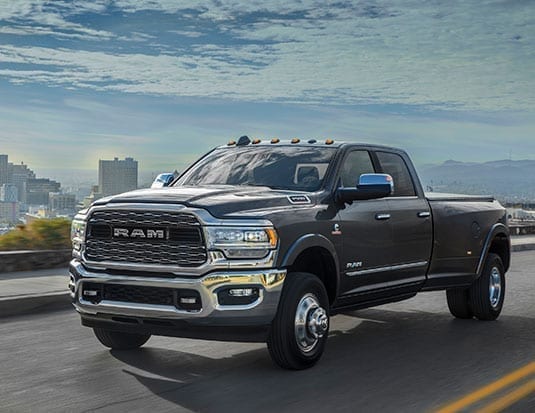 Those who work their trucks hard have hit the jackpot recently, as all three heavy-duty manufacturers are overhauling their bigger brutes. Chevrolet and Ford have new models out for 2020, while Ram has introduced its new 2500 and 3500 trucks for 2019.

Ram’s headline is an available high-output diesel that makes 1,000 lb-ft of torque, but there are all sorts of improvements to this new truck.

As before, Ram HD comes in Regular, Crew, and Mega Cab, with a base starting price of $57,995. The styling is still that handsome big-rig look, but smoothed out and with a taller, more upright grille to handle a larger radiator for increased cooling. The hood is now aluminum for weight-saving, while the frame has been beefed up with more high-strength steel, and there are stronger axles and improved brakes.

The Ram’s base engine is a 6.4-litre Hemi gasoline V8 that produces 410 hp and 429 lb-ft of torque, and for the first time, mated to an eight-speed automatic. The diesel is a 6.7-litre inline-six as before, but it has been completely overhauled, with a new compacted graphite-iron block, new cast-iron head, upgraded variable-geometry turbocharger, and stronger pistons. It used to be available with a manual transmission, but now mates exclusively to a six-speed automatic.

The Ram returns a smooth ride and with well-weighted, communicative steering, although I find GM and Ford’s current models to be just a little quicker with their steering response and handling.

Towing tops out at 35,100 lbs—100 lbs more than the current Super Duty—but GM has already announced 35,500 lbs for its upcoming new truck, and Ford hasn’t yet announced specifications for the 2020 Super Duty. That includes engine specs, and given Ford and Ram’s historic rivalry, it’s unlikely the Super Duty’s diesel will come in below that 1,000-ft-lb gauntlet that has been thrown down.

Available items on this new Ram include a 360-degree camera, including a view into the bed for checking on cargo or lining up a gooseneck or fifth-wheel hitch. For the first time, the convex portion of the towing mirrors is power-adjustable. There’s also a rear auto-levelling air suspension that can be manually adjusted for easier loading, or for manoeuvring under a gooseneck and then raising the truck bed to mate with the hitch.

Inside the cabin a massive 12-inch touchscreen—borrowed from the Ram 1500—can be optioned, but there are still hard buttons alongside to adjust the climate control with minimal distraction. There’s also lots of storage, with a large and configurable centre console box, and storage bins behind the Mega Cab’s reclining rear seats.

Competition is usually good for customers, and in the heavy-duty segment where fleets need their trucks to meet very specific needs, this three-way scrap for supremacy is providing a lot of choice for them. With Ram, that includes a wide range of trim levels, lots of pulling power, and for now, the highest torque rating in town.