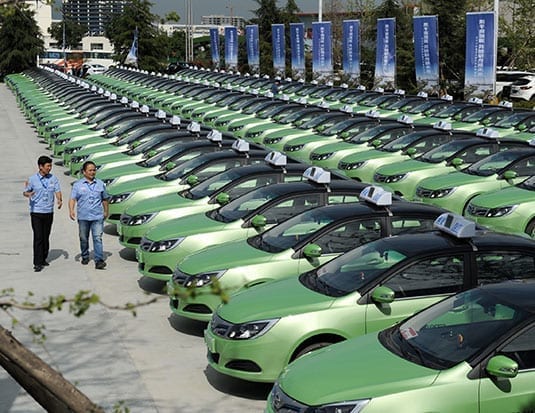 According to a press release by the Municipal Government, Xi’an, the capital city of China’s Shaanxi province, will launch 200 new electric taxis as part of its green transportation program, which aims to introduce 6,461 electric taxis by the end of 2019.

“We aim to eradicate emissions and replace the scourge of pollution completely from the city, and one major contributor to greenhouse emissions is traditional methods of transportation, said Wang Jian, Director of the Xi’an Taxi Administration. The introduction of environmentally friendly policies and green travel into Xi’an is a fundamental requirement to protect our environment and create a better future that we aim to achieve by the end of 2019.”

The newly launched, lotus green electric taxis use high energy density, lithium-ion batteries with a lifespan of 405 kilometres. The batteries can receive a charge of up to 50 kW and are compatible with the cities existing infrastructure, allowing drivers to charge their vehicles across the region.

Compared to currently in-use dual fuel taxis, the new pure electric models are quieter, more stable and cheaper to operate. Removing the gas tank in the boot of the car also provides travellers with a more spacious and convenient travel experience.

The launch benefits passengers and drivers alike. The cost of charging an electric taxi is significantly lower than the cost of filling a taxi with traditional fuels, which can increase the net income for drivers. The city is also working with vehicle suppliers to improve after-sales services. At present, the taxi manufacturer has 12 new energy vehicle sales stores and ten after-sales service stores with new energy vehicle maintenance capabilities in Xi’an, providing 24-hour uninterrupted rescue service, as well as a 600,000 km long warranty for motor, electric control and battery.

The program is adding more clean energy to the already-running green update in the city. More than 327 electric taxis were put into operation in Xi’an in the past three years, and 4,699 methanol taxis are now serving the city’s residents from last December.

The capital of China’s western Shaanxi province, Xi’an is an international tourist destination with over 3,000 years of history and world-renowned attractions such as the Terracotta Warriors and its ancient City Wall.