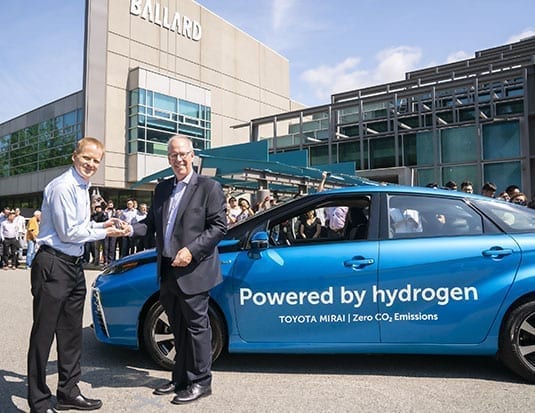 “Electrification of transportation is a global megatrend that is needed to help mitigate the impact of climate change and improve air quality,” said Randy MacEwen, President and CEO of Ballard Power Systems. “Zero-emission fuel cell electric vehicles, or FCEVs, are a key part of the electric vehicle solution that will positively change the lives of the next generation. For 40 years, Ballard has been relentlessly developing and improving fuel cell technology, so we’re extremely proud that dedicated Ballard employees have agreed to purchase B.C.’s first fleet of fuel cell electric cars.”

The hydrogen movement continues to gain momentum in B.C. with Ballard playing a leading role in the development of a global hydrogen society. The country’s first publicly accessible retail hydrogen station opened in Vancouver last summer, with other such stations set to open in Burnaby soon. Natural Resources Canada and the Government of B.C. announced that they would contribute a combined $3 million to fund and build two more retail hydrogen refuelling stations in the province’s Lower Mainland, equalling a total of six stations in Greater Vancouver and Victoria by 2020.

Toyota is the first automaker to bring hydrogen FCEVs to Canada en masse, with Mirai now available for purchase by fleet operators at 12 authorized Mirai dealerships in the Vancouver area. Working alongside other hydrogen stakeholders across Canada, Toyota aims to build the necessary fulling infrastructure, training, and service to support the sale of FCEVs.

“We couldn’t think of a more appropriate partner for B.C.’s first fleet of hydrogen fuel cell electric vehicles than the team at Ballard Power Systems,” added Stephen Beatty, Vice President, Corporate at Toyota Canada Inc. “Ballard is a true global fuel cell pioneer and one of Canada’s most innovative and impactful companies, so we’re proud to add Ballard employees as Toyota customers.”

The Mirai, which means “future” in Japanese, is a zero-emission FCEV that is powered by hydrogen fuel cells and emits only water vapour from its tailpipe. It boasts a 500 km range and refuels in just five minutes. With the extended range and using the same amount of time to fuel as an internal gasoline-powered vehicle, drivers will not have to change their driving or fuelling habits.

Toyota is planning to convert all their Toyota and Lexus models into electric vehicles by 2030, or at least have an electric option available. The company also plans for 50% of its global sales (about 5.5 million vehicles per year) to be electrified. One million of them will consist of zero-emission vehicles.