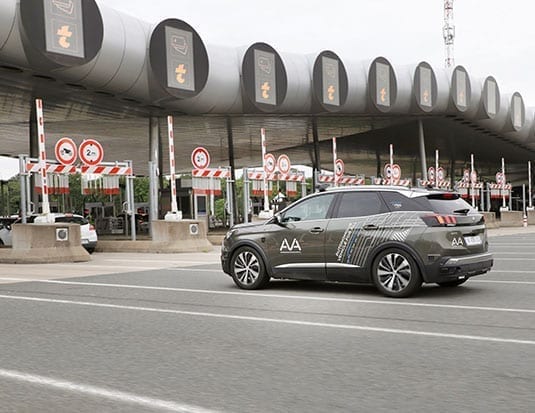 VINCI Autoroutes and Groupe PSA tested an autonomous vehicle’s ability to drive at cruising speed through a tollgate in Saint-Arnoult-en-Yvelines (France) while still in full autonomous mode.

The first scenario was for the vehicle to shift into the autonomous mode in a traffic area that was temporarily changed due to roadworks. The second scenario was to perform a “safe stop,” where the vehicle would drive to a safe place if the driver did not take back control in specific situations, such as when there are obstacles on the road, in severely bad weather conditions, or the motorway ends. The goal of these tests was to determine and improve the vehicle’s ability to adapt to complex driving situations.

“This trial is an additional step towards the deployment of autonomous vehicles. Two years after the first trial, the aim was to include even more constraints in the use cases by strengthening communication between the autonomous vehicle and the road infrastructure in order to broaden the scope of the system’s action while ensuring safety,” said Carla Gohin, Groupe PSA’s Chief Technology Officer. “These trials demonstrate the innovative and practical nature of the collaboration between Groupe PSA and VINCI Autoroutes, which is vital for the development of autonomous vehicles.”

The trials were conducted on the A10 and A11 motorways between Dourdan and Ablis and used a Groupe PSA Peugeot 3008 prototype, which is part of the autonomous vehicle fleet for the “Autonomous Vehicle for All” (AVA) program.

Pierre Coppey, Chairman of VINCI Autoroutes and Executive Vice-President of VINCI, adds “Smart motorway infrastructure is an essential asset in the development of autonomous vehicles. It enhances the contextual data shared with the navigation system to optimize the vehicle’s decision-making abilities and route. In this respect, our collaboration with PSA is full of promise. The motorway network offers a life-sized testing ground for new mobility solutions that will revolutionize road use in the future.”