The Future of Mobility 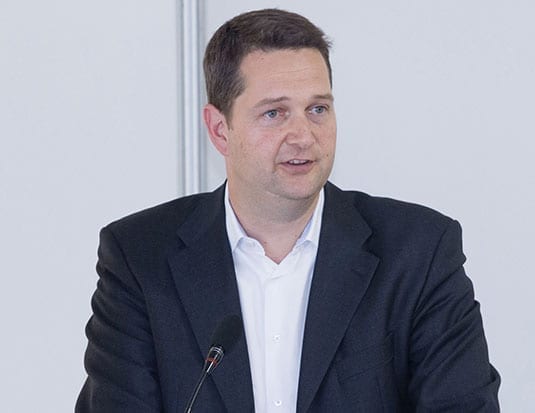 Forward-thinking fleet managers can be part of the solution to a growing problem.

During his closing remarks at NAFA’s 2019 Institute & Expo (I&E), sustainable mobility expert and author Lukas Neckermann discussed ways for companies to benefit from current trends in technology, while encouraging fleet managers to take a leadership position as champions of change in our sustainable mobility revolution.

Over the last century, automobiles have come to symbolize freedom, but now that roads are constantly gridlocked and declining air quality is a global issue, are we still free? According to Neckermann, drivers in Boston spend an average of 164 hours sitting in traffic, in comparison to the national yearly average of 143.6 lost hours for drivers in major U.S. urban centres.

Neckermann also suggested swapping a certain percentage of vehicle fleets with smartphones. A 2018 study revealed that 30% of the 17,224 people surveyed would be ready to or had already gotten rid of a vehicle in favour of ride-sharing services.

With the sheer number of tropical storms, floods, landslides, and wildfires resulting from record temperatures and droughts, Neckermann believes we can no longer deny the effects of climate change. In addition to the staggering human and social costs, these catastrophes are also impacting the economy. Figures for 2018 total approximately $160 billion in losses.

Neckermann also reminded the audience that 12 American states and 274 cities had signed the Paris Agreement on climate change, while the number of companies implementing green initiatives is growing. Global giants such as Siemens and Maersk have committed to implementing zero-emission fleets, or carbon-neutral operations, over the next few decades.

“In settings where usage parameters are well-defined, the electrification of a portion of the vehicle fleet has the potential to immediately reduce total acquisition costs,” Neckermann said, citing real-world examples such as the German postal service, the Auckland, New Zealand municipal fleet, UPS and even Walmart, who’ve decided to accelerate the process.

While New York City officials have already concluded that the electrification of their fleet is the most economically viable option, Neckermann points out that in the next 36 months, over 200 new plug-in vehicle models will be launched in the global market.

No segment will be excluded, not even pickup trucks. In fact, a few days after the I&E, Ford announced that it is investing $500 million in Michigan-based Rivian, a company that was among the first to launch an all-electric pickup, the R1T, which has a range of nearly 400 km.

As was the case with the conference speakers who preceded Neckermann, he believes that we need to trust the various driving aid technologies. “If these new technologies were installed in every new vehicle, we would benefit from a 23% reduction in accidents causing bodily injury during lane changes, while automatic emergency braking would reduce collisions leading to injuries caused by late braking by a whopping 54%.”

If you would like to increase your knowledge base in regard to new mobility, Neckermann, in collaboration with NAFA, has published a practical guide, The Mobility Revolution: A Primer for Fleet Managers. A downloadable version is available on the NAFA website.