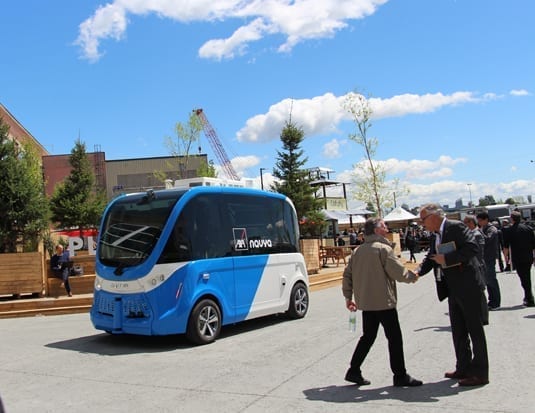 The 3rd edition of the Movin’On Summit, organized by Michelin–which took place June 4 to 6 in the Montreal borough of Pointe-St-Charles’s Grandé Studio–focused on the importance of mobilizing stakeholders from the various fields of expertise so as to maximize the impact of environmental sustainability and carbon reduction efforts.

Once again, the event, organized in conjunction with C2 and the City of Montreal, attracted and united thousands of experts from across the globe to discuss the fact that we can no longer put off until tomorrow the implementation of initiatives that will provide an environment in which future generations may thrive.

A total of over 6000 participants from 44 countries and 40 cities participated in the three-day Movin’On event. The conference featured 95 guest speakers, 42 workshops, with over 31,000 networking initiatives occurring over the three days.

“The advent of modern modes of transportation proved to be a powerful lever of economic development,” pointed-out new Michelin CEO, Florent Menegaux. “Now, the challenge is to increase the mobility offering in a more inclusive manner, with less impact. By 2050, two thirds of the world’s population will be living in urban areas, and the total number of vehicles worldwide will exceed 2 billion.

Under the theme “From Ambition to Action”, Florent Menegaux explained that the conference will serve to develop a global vision, which will be shared and applied, “as the immenseness of the problem which we must overcome requires a collective and concerted approach.”

As the upcoming year is likely to be an important one in terms of environmental agenda and biodiversity, event organizers have already announced that this gathering of sustainable mobility ecosystem stakeholders will be returning to Montreal from June 3 to 5, in 2020.

If you missed out on this year’s Summit, check out the following summary.