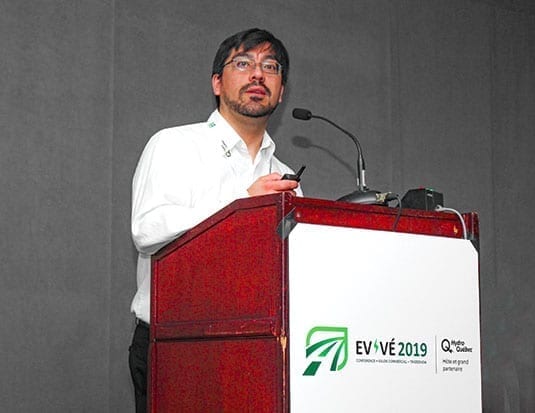 The rate of adoption of electric vehicles (EVs) rose by 130% in Quebec in 2018. As for British Columbia, all vehicles sold will be of the zero-emission variety by 2040.

When provincial governments introduce incentives for the acquisition of electric vehicles, the effects are both immediate and significant. This fact was acknowledged by representatives from Quebec, British Columbia, Nova Scotia, and Alberta, who presented the results of electrification initiatives in their individual provinces at the 2019 EV/VÉ Conference & Trade Show.

EV sales across Quebec have risen steadily since 2013, which coincides with the introduction of provincial incentives of up to $8,000 for the acquisition of these types of vehicles. In 2018, spurred by the introduction of a law requiring vehicle manufacturers to sell and lease a mandated number of low-emission vehicles, the increase totalled a record 130%, explained Bernard Lamonde, from Transition énergétique Québec.

The Province also offers subsidies of up to $50,000 for companies interested in acquiring specialized EVs. An amount of $100 million is planned for the 2019 budget to encourage the acquisition of low-emission commercial vehicles, while $6 million is earmarked to help passenger-vehicle fleets acquire these same types of vehicles.

Alberta is lagging behind

In Alberta, although the technology isn’t as advanced as in Quebec and B.C., the province has set an objective to implement an electrification strategy by 2030. They also hope that the number of EVs on Alberta roads will reach 120,000 by 2035.

Spurred by the recent federal purchasing incentives, they estimate that low-emission vehicle sales will grow by 39% over the next five years. As for the remaining provinces—those without any form of incentive—they should at least reap the benefits of rebates of up to $5,000 from the recently launched federal government program.

Nathaniel Pearre, from Dalhousie University, presented a study that looked at the impact of the implementation of public charging station networks on EV sales in Nova Scotia. As of last summer, a total of twelve public charging stations have been erected in that province. The study identified a total of 190 individual users who had accessed the facilities between June 2018 and March 2019.

The researcher could not make a correlation between the implementation of the network and any measurable increase in Nova Scotia EV sales in comparison to the rest of Canada. He concluded that, while sales did increase since the charging stations were installed, the increase is comparable to the marked increase across the country. He also concluded that the network was mainly used by tourists during the summer season, rather than by local residents. A marked decrease in usage was also noted as of last fall.

He is of the opinion that the network is there to reassure EV owners, but it has no discernible impact on sales. An incentive program would be required to stimulate new EV sales.