Mirai Comes to Dealerships in B.C. 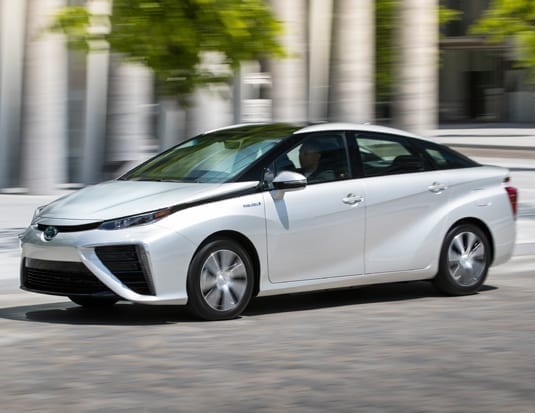 The Toyota Mirai fuel cell electric vehicle will be available to purchase in B.C.

Toyota Canada announced the arrival of the Toyota Mirai hydrogen fuel cell electric vehicle (FCEV) at 12 Vancouver area Toyota dealerships at the beginning of July and will only be available for purchase by fleet operators.

The Mirai, which means “future” in Japanese, is a zero-emission vehicle (ZEV) that is powered by hydrogen and emits only water vapour from its tailpipe; thus, it qualifies for a rebate of up to $6,000 under the provincial government’s Clean Energy Vehicle (CEV for BC) program.

It boasts a 500 km range, with a refuelling time of five minutes, equivalent to that of an internal combustion engine, making it convenient for drivers to maintain their current driving or fuelling habits.

With the fleet of Mirai hitting Quebec roads earlier this year, Toyota became the first automaker to bring hydrogen FCEVs to Canada en masse. The company has been working with other hydrogen stakeholders across Canada to build the necessary fuelling infrastructure, training, and service to support FCEV sales.

The country’s first publicly accessible retail hydrogen station has been up and running in Vancouver since last summer with another soon to open in Burnaby, and two others currently planned in the province’s Lower Mainland. Natural Resources Canada and the B.C. government are investing a combined $3 million to build these two stations and hopes to have a network of six stations in Greater Vancouver and Victoria.

Toyota is committed to fuel cell technology and is promoting the use of electric vehicles and the growth of its supporting infrastructure across Canada. By 2025, every Toyota and Lexus model globally will have an electric model or electrified option. By 2030, 50% of Toyota’s global sales, or roughly 5.5 million vehicles per year, will be electrified, and one million of those will be ZEVs.