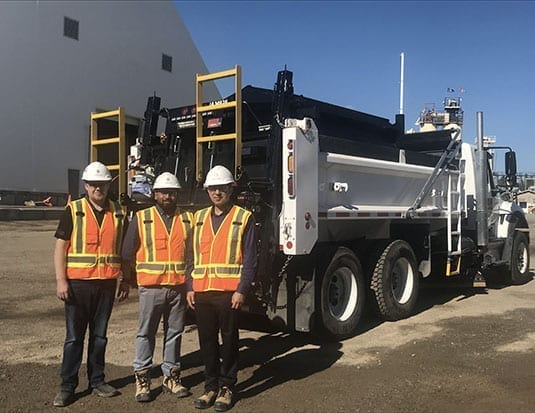 When Majid Asefi, Manager of Fleet Operations for the City of Calgary, looked for multi-purpose design solutions for heavy-duty vehicles, he couldn’t find anything on the market. So he and his team simply designed their own.

The result is an innovative design solution that has turned single-use heavy-duty vehicles into multi-tasking workhorses, and it’s saving this fleet money.

“We are not competing with the private sector,” Asefi stresses. “There is a legitimate need and opportunity for saving money for taxpayers. We tried to buy these units from the market. Because it was not available, we developed this design.”

Conversations about how to save money started a few years back. “The seasonal nature of the anti-icing and asphalt carrier equipment meant that it was just sitting for months at a time,” says Asefi. “We saw the opportunity to share a base unit that could work year-round with components that could be plugged in, loaded and then dropped off when the season is over.”

Taking advantage of the city’s engineering team and fabrication shop, the work began in-house. “The first thing was getting rid of the chassis mount sanders,” Asefi recalls. “We replaced them with sanders with legs so they can be put in and out of the units as needed.”

Now, city staff can switch a spring/summer asphalt carrier or dust suppression carrier into a wintertime sand spreader or anti-icer in 20 minutes. “They just back up to the component, it goes in the box, they connect the controls, and plug and play—ready for the next operation.”

The design has resulted in savings of $4.5 million in capital and operating costs over the life of the vehicle, and the asphalt carrier design recently won an American Public Works Association (APWA), Alberta Chapter award for multi-purpose design.

The City of Airdrie recently purchased a multi-purpose truck with two components—a slip-in asphalt carrier/recycler and stainless-steel sander spreader. “Training was very limited,” Asefi admits. “They had to learn how to load the unit, but this is very intuitive—if they align it properly, the rest of it is pretty straightforward. The majority was to show them how the controller works. It’s very intuitive, and was built with that in mind.”

He says there was a lot of excitement because the same operators who were using the asphalt carriers had to use different control systems that were not integrated with the truck. “We integrated the controls, so they simplify the life of the operator,” explains Asefi. “Operators like it more because now they have to deal with fewer distractions when they drive the unit.”

The City of Calgary is looking to license the intellectual property behind the units, and turn it into a revenue stream. “We’re working on an expression of interest that will go out very soon,” says Asefi. “That’s to see who is interested in acquiring the license for manufacturing, sales, marketing—the whole gamut, for this unit.”