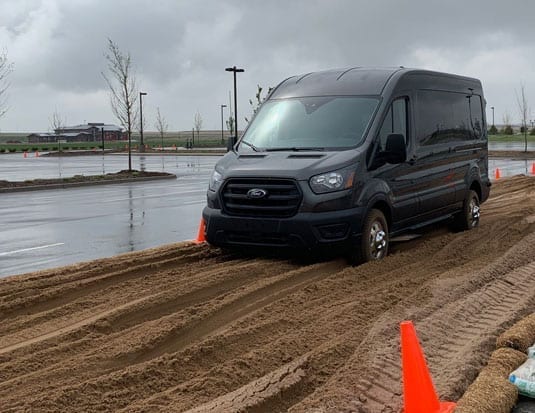 Ford invited more than 650 of their North American customers, including over 50 Canadians, to the company’s annual fleet preview event, which took place this year in Denver, Colorado. Despite the frosty weather, and the fact that it snowed in mid-May, all received a warm welcome from Ford’s fleet team.

The focus of this year’s program, which was themed “The Best Never Rest,” was Ford’s dedicated to the needs of the fleet customer. Besides showcasing a number of new models, including a new Escape, the brand-new segment-busting F-600, and a new all-wheel-drive Transit, Ford put the spotlight on innovation and technology.

One of the headline grabbers at this year’s event was the brand new F-600, which was introduced to the media earlier this year in Detroit. The F-600 is positioned between the F-550 and the F-650. It’s a class 6 truck in a class 5 super duty package.

Although it’s the same size as the F-550, the F-600 features an upgraded driveline and chassis components, along with upgraded tires and wheels. And a gross vehicle weight rating of 22,000 lbs. It’s available with either a gas or diesel powertrain, and comes in 4×4 and 4×2 drivetrains.

The new 2020 Transit was also on display, and available to test drive. The workhorse of Ford’s van line, it now boasts intelligent AWD. That’s a big deal for customers who need to get the job done, regardless of the weather or road conditions.

The AWD system is always on, which means drivers never have to consciously flip a switch to benefit from extra traction. The Transit also features advanced safety systems to keep the driver safe, and to help avoid accidents before they happen.

Ford told their fleet audience that the company is firmly focused on work, with 90% of investments going into vans, trucks and utilities. In addition, by 2020, the company plans to replace 75% of their entire lineup.

Moreover, by that same year, all of Ford’s vehicles will be connected, thereby increasing both safety and efficiency. The company is investing USD $11 Billion in electrification, and will be offering a fully electric F-150.

The theme of this year’s event, “The Best Never Rest,” was repeated numerous times, reminding Ford’s fleet customers that the sale is only the beginning of the relationship. As Henry Ford himself said: “The sale does not complete the transaction between us and the buyer, but puts a new obligation on top of it.”

Ford stressed the company’s commitment to telematics, promising that modems will be standard equipment on 2020 vehicles, thus accelerating the adoption of telematics in the industry.

Law enforcement has been an early adopter of telematics, and the pursuit vehicles Ford offers are getting enhanced telematics features, including seatbelt use monitors (including the passenger seat), as well as geofencing.

Ford announced plans to introduce a number of new telematics features in 2020. Driver ID, for instance, will allow fleet managers to know which driver is operating which vehicle. With “dispatch and routing,” fleets will be able to assign jobs to drivers, the navigation application will then route them to the job, and the driver will then be able to close out the job with the in-vehicle display, as well as communicate with dispatch that the job has been completed.

Finally, “in-cab coaching with voice prompts” will employ the SYNC voice to encourage safe and fuel-efficient driving behaviours. More details on all three systems will be available closer to launch, later this year.