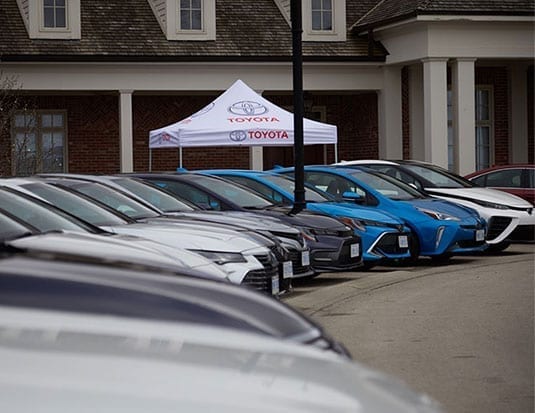 Toyota Canada recently hosted a vehicle launch with Lexus showcasing its all-new, upcoming vehicles at the Rattlesnake Point Golf Club in Milton. The event was well attended by fleet managers and other guests, who all looked forward to the test-driving opportunity after the presentations. More than 11 out of the 26 vehicles present were electric cars.

After registration, attendees were given the opportunity to network during breakfast. Later, Dave Nichols, National Manager, Dealer Standards and Sales Operations at Toyota Canada, began the presentations, welcoming everyone to the event, provided a brief overview of what was to come and introduced the first speaker, Romaric Lartilleux.

Lartilleux introduced the new extensive Toyota lineup for late 2019 and early 2020 highlighting the key areas of improvement and the new design, performance and safety features that the cars boasted. Some of the new cars he introduced were the:

After Lartilleux, Matt Killackey, Area Sales Manager from Lexus did a short vehicle presentation of the upcoming Lexus models as well. The four main models that he talked about were:

After the vehicle presentations were over, signed waivers were handed in at registration for a chance to test-drive some of the new vehicles that will soon be available in markets. Attendees were able to witness and experience first-hand the new designs, new technology and new features that had been presented just moments earlier. All vehicles came with a map inside the car, giving drivers a planned route to test the car.

The day ended in excitement and lunch, with many opting to collect a to-go lunch that was prepared beforehand. And before leaving, the hosts offered guests a choice between a Lexus bag or a Toyota garment bag as a souvenir.

Here are some pictures from the event.