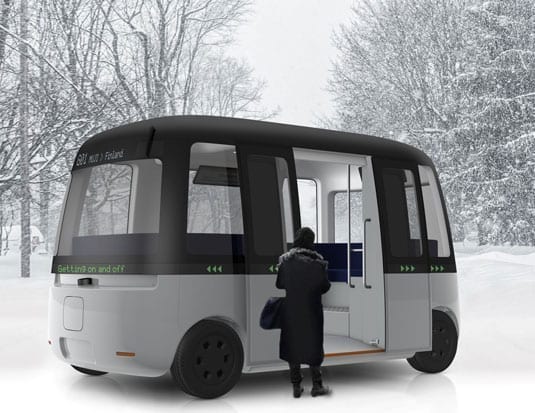 The Gacha autonomous shuttle bus is an all-weather concept.

A partnership between MUJI and Finnish autonomous driving company Sensible 4, has resulted in what is being called the first all-weather autonomous vehicle. With 4 Lidars, 8 radars, a 360 deg camera vision, a high precision GPS, an inertia unit, and control over 4GLTE/5G, this all-weather vehicle aims to operate in some of the most challenging weather conditions.

Weather plays a critical role in opening the market for autonomous buses or robotaxis. Currently heavy rain, fog or snow are preventing autonomous vehicles from driving, as the existing technologies are mostly being tested and developed in warm climate conditions.

“We are developing these vehicles so that they can become part of daily transportation service chain. Autonomous vehicles can’t become mainstream until their technology has been insured to work in all climates,” says Harri Santamala, CEO of Sensible 4.

The Gacha shuttle will be operating in three Finnish cities as part of a real-life trial, with the goal of rolling out a fleet by 2020.