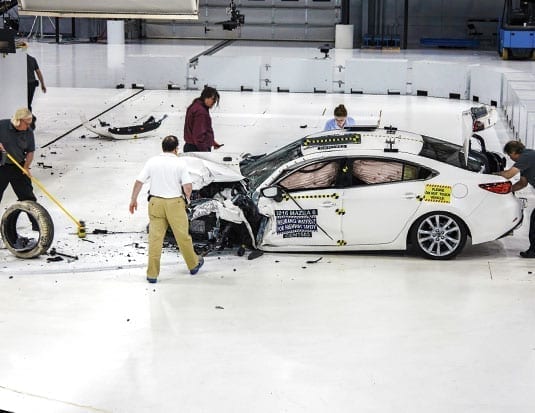 Do your research before making a purchase decision.

Cost is often a deciding factor when buying new fleet vehicles, but of course you want to keep your drivers safe. Spend a few hours on the Internet and you can make the best decisions within any budget.

The US government’s National Highway Traffic & Safety Administration (NHTSA) and the insurance industry-funded Insurance Institute for Highway Safety are two of the most relied-upon sources for crash test data.

NHTSA (nhtsa.gov/ratings) conducts a number of tests, including: frontal crashes at 56 km/h, side impact crashes, and (math-based) rollover resistance tests. The IIHS (iihs.org/iihs/ratings) complements government results with a variety of other frequent crash types, such as a small overlap front test, where a quarter of the car’s width hits a driver-side barrier at 64 km/h. They rate all results as Good, Acceptable, Marginal or Poor relative to other vehicles of similar size.

The IIHS also rates vehicles on crash avoidance and mitigation based on the technologies that can help prevent a crash, with “basic, advanced or superior” ratings awarded. Vehicles that earn good ratings on five crashworthiness tests and get an advanced or superior rating for crash prevention are named “Top Safety Picks.” They also rate headlights as good, acceptable, marginal or poor, making the IIHS the most comprehensive one-stop shop for safety information.

So, why bother? The IIHS released a study in 2011 that found drivers of vehicles that perform well in its crash tests were 70 percent less likely to die in a driver’s side crash than those behind the wheel of a vehicle rated “Poor.”

That said, renowned Canadian auto journalist Jim Kenzie, the Toronto Star’s long-time chief reviewer and the first journalist to be awarded the Automobile Journalists’ Association of Canada’s Journalist of the Year Award (way back in 1984), points out that every car sold today must pass minimum standards that are so far removed—and improved—from even 10 or 15 years ago that any new car is an improvement over those in even the fairly recent past.

“There’s a video on YouTube showing a modern smallish car crashing into a 1959 Chevrolet, and the bigger, older car is completely destroyed. The new car ends up practically in the Old Chevy’s backseat.”

You should note that different iterations of the same model can have different ratings; one may have “poor” lights and another “good.” The reason is often the price. The IIHS found the 2017 Ridgeline pickup’s lights “outstanding” on the top-of-the-line model with LED low-beams and “poor” on the other versions.

Not all vehicles are tested. NHTSA buys its models from dealers and concentrates on new or redesigned vehicles. A vehicle that hasn’t changed in a long time won’t be listed with current results, either; the IIHS tested the 2008 GMC Acadia and says its results still apply to the current Chevy Traverse and Buick Enclave that are still built on the same platform.(GM overhauled the Acadia itself for 2017, but it earned the same “good” ratings as its predecessors.) Some ratings will also apply only to vehicles with optional equipment.

As far as Kenzie is concerned, above all others, there’s one safety feature that remains paramount. “By far the most important factor for a passenger surviving a car crash is and has been since the early 1960s wearing a seat belt,” he says. “Compared to that, nothing else really matters.”