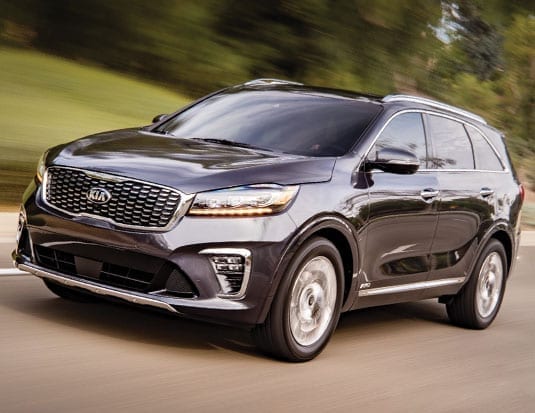 First introduced in 2002, the Kia Sorento has established itself as a dependable and quality offering in the burgeoning mid-size crossover segment. Following a major redesign in 2016, it’s received a number of new upgrades for the 2019 model year, designed to build on its attributes and make it an even more enticing choice for consumers.

Perhaps the biggest difference, is the front fascia. A new grille and redesigned headlight clusters with optional LEDs, lend a more sophisticated appearance. At the rear, a new bumper and light assembly also provides a more integrated look than its predecessor, with the rear lamps giving off a distinctive and almost jewel like appearance after dusk.

According to Ted Lancaster, Vice President & COO, Kia Canada, the automaker is aiming to shift 17,000 Sorentos for 2019, with the majority of those being V6-engine EXs.

While many rivals have chosen to forgo silky V6 engines in their more recent offerings as a nod to CAFE requirements, sticking with a six-cylinder powerplant provides greater flexibility, especially when it comes to negotiating steeper grades or towing. The V6, rated at 290 hp and 252 lb.-ft. of torque is teamed with new, in-house designed eight-speed automatic, delivering turbine smooth throttle response with plenty in reserve. The new transmission delivers an eight percent improvement in fuel economy (12.5L/100 km city, 9.7L/100 km (highway), while also enabling the Sorento to tow up to 5,000 lbs., good enough for a pair of Sea-Doos, snowmobiles, or small fishing boat. The 2.4L four-cylinder/six-speed auto combination, by contrast, feels like it’s working much harder under all conditions and delivers only marginally better fuel economy 9.0/9.7L/100 km city/highway).

Although competing in a crowded market segment, the 2019 Sorento, with its multiple trim levels, wide price spread and available V6 engine is worthy of a serious look, both for fleet customers and their families.