Movin’On: Setting the Wheels in Motion 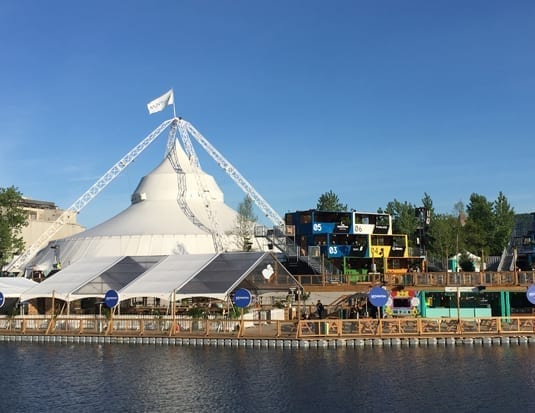 Over 4000 conference participants gathered at the Arsenal in Montreal’s Griffintown neighbourhood from May 30 to June 1 for the 2018 edition of the Movin’On Summit.

Beyond its noble aspirations, the event serves as a platform for those aspiring to a greener mobility and transportation future. Several groundbreaking initiatives were launched that will undoubtedly have a positive impact on the future of sustainable mobility.

Case in point: Michelin, which organizes this international summit in collaboration with C2 and numerous additional partners, announced that by 2048, all of the tires it produces will be made from renewable resources and will be 100 % recycled.

The Lion Electric Co. presented an all-electric minibus able to travel 240 km between charges. Company founder and president, Marc Bédard, who also promised to launch an all-electric urban truck within 6 months, pointed out that the price of the all-electric bus is similar to that of a diesel model, somewhere in the $ 275,000 to $ 400,000 range depending on equipment.

Quebec Vice-Premier, Dominique Anglade, unveiled a five-year Ground Transportation Action Plan, in which her Government is injecting 120 million dollars. The goal is to stimulate innovation and research by increasing the visibility and presence of Quebec-based companies across the Globe.

French innovation company Symbio unveiled a hydrogen fuel-cell module which can be retrofitted to electric vehicles to help them double or even triple electric-vehicle autonomy. Symbio President and CEO, Fabio Ferrari, explained how this solution (H2Motiv), which attaches to vehicle cylinder heads, can be refilled with hydrogen within three to five minutes, will be distributed by Michelin.

In addition to these announcements, we had an opportunity to attend several conferences which we will summarize in our upcoming print editions.

If you haven’t had the opportunity to attend one of the first two Movin’On Summits, you’ll be glad to know that it will again be held in Montreal in 2019, from June 4 to 6.

In the meantime, here is a summary of this year’s edition.