Arctic Arrow: Keeping the Lights On 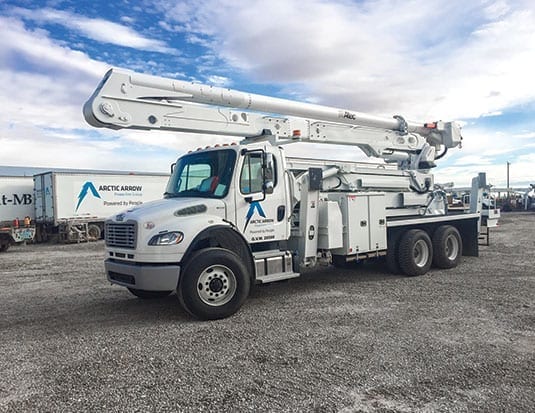 This fleet keeps the power flowing to customers in B.C., Alberta and Saskatchewan.

Scott Morris made the switch from Pepsi—but not to Coke.

Arctic Arrow helps ensure the lights stay on in B.C., Alberta, and Saskatchewan.

Morris has earned a reputation as an outstanding fleet manager—he worked himself up in the business, starting as a driver, then moving to sales and into management at Pepsi. Eventually, he would end up with 1,500 assets under management in his job as Pepsi’s fleet manager for western Canada. So when it comes to fleets and fleet management, it’s fair to say he knows his stuff.

Nearly two years ago he moved over to Arctic Arrow to manage their fleet of 500 power line service vehicles—a fleet of a different colour, to be sure.

“Most of the job at Pepsi was over-the-road transport, with the vehicles turning over a lot of miles. At Arctic Arrow our units roll to the job site, park and idle while the technician goes to work,” he says. Energy is expended through PTO functions. There’s also a lot more technical gear on board.

Managing the Arctic Arrow fleet has its particular challenges, notably, training. “When you’re hiring for this job, you’re looking at technicians who have been trained in line and power tech. They’re not really drivers by training. We need to provide coaching in defensive driving, for example. We’re lucky to be able to leverage our safety department for that,” he says.

But that’s not the only challenge. “These days, fuel costs are an issue. I expect it will get worse over the summer,” he says.

Morris has seen plenty of change in his time in the business, from early days at Pepsi to today’s modern technical fleet at Arctic Arrow. “The major change has been in engines with emissions reductions and a lot more technology built in. Used to be you’d send a mechanic out with a toolbox. Now you send them with a laptop,” he says.

He also notes that the advanced telematics installed on the Arrow fleet have changed the nature of his work. Arrow uses that data to keep tight control of fleet performance.

Although he has certainly seen change, some things he notes have remained the same. “The structure and operation of the fleet business is still basically the way it has always been. Regulations are basically the same. We still focus on preventative maintenance,” Morris says.

At Arctic Arrow, Morris spends less time on the road than he did when he was with Pepsi. That gives him more time to spend with his family. Both of his daughters play competitive soccer, so there’s travel and time involved. Still, he manages to carve out a few hours here and there to play a little hockey with the boys.

As a leading fleet manager, Morris has been an active participant in industry working groups over the years. It’s part of the job that he enjoys, and that won’t change. “The networking, sharing ideas and experience with others in the business—it’s what makes the job a lot of fun,” he says.

As for running a state-of the-art fleet, he says, “There’s always something new to learn. I like that. You never have it buttoned down. There’s always room for improvement, and if you think you’re the best you’re kidding yourself.”