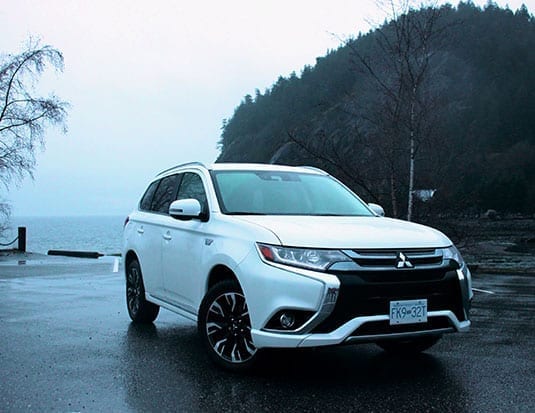 The new 2018 Mitsubishi Outlander PHEV was put to the test in January, as media types from across Canada headed to Vancouver for a ride and drive on the breathtaking Sea to Sky Highway.

The magnificent natural and man-made settings of the event replicated the conditions and terrain for which the Hybrid SUV was designed: urban and suburban family living and weekend adventuring.

As Mitsubishi Motor Sales of Canada Senior Manager, Product Planning, Don Ulmer explained: similarly to its gasoline-engined predecessor, the Outlander PHEV is the ride of choice for both day-to-day family living as well as weekend escapades, while distinguishing itself as a judicious choice for Canadians concerned about fuel economy and the environment.

“The Outlander SUV combines the frugality of an electric vehicle, power and versatility of all-wheel drive with the interior roominess and convenience of an SUV, without compromise,” explains Don Ulmer. “On the fuel-economy front, the hybrid mode seamlessly integrates with the all-electric mode to deliver the best of both worlds to Canadian drivers.”

The official Canadian introduction of the Outlander PHEV comes five years after its initial launch, a delay that allowed Mitsubishi to apply a host of improvements and upgrades, as explained by Don Ulmer:

“The 2018 model available in the Canadian market is designed to prioritize all-electric mode, which wasn’t the case for 2013 models,” he clarifies. “The hybrid to all-electric transition has also been vastly improved so as to make it virtually imperceptible, for added comfort.”

The Outlander PHEV is equipped with three driver-selectable battery recharge modes, making it possible to recharge the battery to 80% capacity in approximately 20 minutes.

We learned how the group plans to integrate autonomous driving technology into 40 new vehicle models by 2022.

Here are some of the highlights of the Canadian media launch ride and drive.