car2go: A Touch of Class 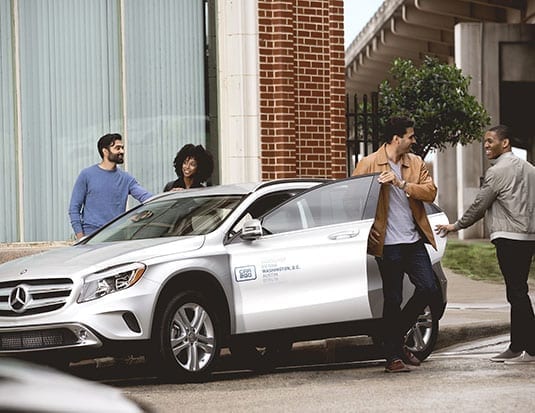 The debut of Mercedes-Benz CLA and GLA models on the car2go fleet is offering members a taste of the good life.

The sharing economy really took off like crazy just a few years ago, delivering a lot of energy to Daimler North America’s subsidiary, car2go.

Starting with fleets of Smart cars in four Canadian cities—Vancouver, Calgary, Toronto and Montreal—the concept has mushroomed and this year has been expanded to include two Mercedes-Benz models available to members on a by-the-minute, by-the-hour, or daily basis. The response has been what you might expect—terrific!

Vancouver boasts the most vehicles (1,100) and more registered members (144,000) of any of the 11 North American locations. There are just over 2,600 vehicles and more than 375,000 members total in the four Canadian locations.

Popular with the younger crowd

The premise is simple and the Smart car fleet proved popular right away, particularly with younger city dwelling adults who are happy to have a car when they need it, and no ownership problems when they don’t.

They can pick up a car at a location they source via an online map, when they are ready to go. Each member’s smartphone unlocks the vehicle, their PIN code releases the key, and the rental begins. The rates are affordable: $0.41 a minute, $15 per hour and $59 per day (in Toronto) including everything, even fuel.

Across the country, members have quickly found another spate of new ways to temporarily use a vehicle. According to Vancouver General Manager Chris Iuvancigh, the all-wheel-drive GLAs have seen quite a lot of weekend getaways, particularly in the areas surrounding the Greater Toronto Area.

Obviously, they also have significantly more capacity than a Smart car and are perfect for a run to Costco or on a ski trip.

The CLA offers yet another menu of opportunities: the big date, the business meeting, even a a wedding. One-way trips to the airport are facilitated by parking at terminal hotels. “We are delighted that the new vehicles have opened up a lot of opportunity for transporting friends and family, plus many new uses.”

Iuvancigh notes that a lot of the members now have the opportunity to drive a Mercedes-Benz for the first time—an experience that they really enjoy. The response has been strong both in comments online via social media and directly. Here are a couple of indicative comments from Facebook:

“I had the all black Mercedes 2018 (with leather seats, my favourite)!

“Taking a GLA through the mountains was the best driving experience of my life.”

There are plenty more in a similar vein. While not every fleet has the ability to combine small urban cars with interesting luxury vehicles, the strategy is certainly very popular with car2go members.

While there are no specific plans just yet, Iuvancigh feels that there is so much potential for expanding the concept in urban areas that there are sure to be further innovations and additions to the fleet.