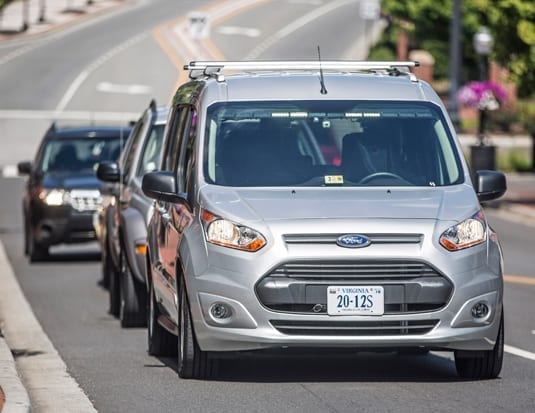 Ford and Virginia Tech are testing a method for self-driving vehicles to communicate with pedestrians, human drivers and bicyclists.

The Ford Motor Company has partnered with the Virginia Tech Transportation Institute in order to address a challenge that we will face once autonomous vehicles hit the road.

Today, a simple head nod or hand wave from a driver is usually enough to indicate it’s okay for a pedestrian to cross the street, but in an autonomous vehicle future, how will a self-driving car with no human driver communicate with pedestrians, cyclists or humans operating other cars on the road?

“Understanding how self-driving vehicles impact the world as we know it today is critical to ensuring we’re creating the right experience for tomorrow,” said John Shutko, Ford’s human factors technical specialist. “We need to solve for the challenges presented by not having a human driver, so designing a way to replace the head nod or hand wave is fundamental to ensuring safe and efficient operation of self-driving vehicles in our communities.”

The team considered using displayed text, or using symbols, but in the end, the researchers decided lights are the most effective since light signals for turning and braking indication are already standardized and widely understood.

Ford is working with several industry organizations to push toward the creation of a standard. The company is also working on ways to communicate with those who are blind or visually impaired.