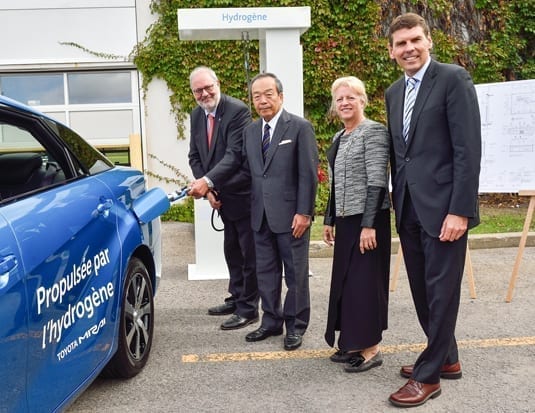 Toyota is collaborating with the Québec Government to a project that aims to reduce the carbon emissions of vehicles. During a meeting with Energy Minister Pierre Arcand, the Chairman of Toyota Motor Corporation, Takeshi Uchiyamada, shared how Toyota plans to work closely with the Québec government to achieve this goal.

“It’s been a productive meeting with Toyota. I’m pleased to see that they are interested in initiatives in line with our 2030 Energy Policy, which puts consumers at the forefront of our action,” said Energy Minister Pierre Arcand. “By collaborating with the Government of Québec and Transition énergétique Québec (TEQ), Toyota will help us to support, encourage and promote energy transition, innovation and efficiency and to reach our target for reducing the amount of petroleum products consumed.”

Uchiyamada announced that Toyota Canada’s first hydrogen fueling and service facility will be built at its Québec zone office as a first step in the development of hydrogen fueling infrastructure in the province.

“Toyota and the Province of Québec have both been leaders in the reduction of carbon emissions,” said Uchiyamada. “We continue to work closely with the Québec government to help them build the infrastructure required to make adoption of greenhouse-gas-friendly technology a reality.”