Fleet of the Month: Richmond, B.C. 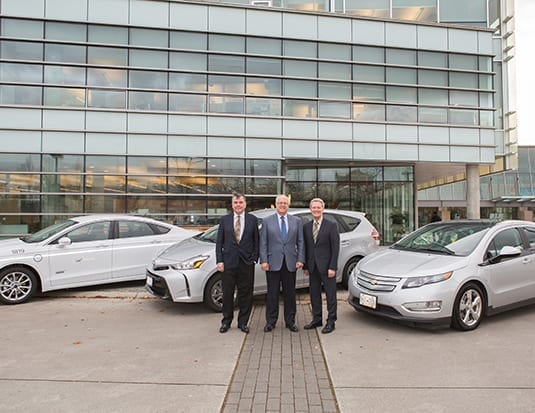 The City of Richmond is the first and only municipality to receive a Platinum Award from E3 Fleet.

Late last year, The City of Richmond received a Platinum Rating from E3 Fleet, a national program that recognizes excellence in fleet management and environmental performance.

“A Platinum Rating is difficult to achieve,” explains Roger Smith, Executive Director, Fleet Challenge / E3 Fleet Standards Program. “That’s because the fleet has to be carbon neutral, which is very difficult to do.”

So hard, in fact, that only one other fleet in Canada (University of British Columbia) has a Platinum Rating.

“The City of Richmond employed a lot of ingenuity and innovation to be carbon neutral,” Smith explains. “They have a carbon market within the City of Richmond, they put a price on carbon long before it was law in the province, and they self-fund other projects in the city that are pursuing green initiatives.”

Living up to high standards

The City of Richmond takes emissions very seriously. “City Council has mandated us to have a reduction in our emissions by 2020,” explains Jennifer Kube-Njenga, Program Manager, Fleet Operations, Engineering and Public Works, City of Richmond. “With that in mind we developed the Green Fleet Action Plan, which includes right-sizing, down-sizing, electric vehicles, and everything from evaluating our fuel data to having data management programs for our fleet department, along with education, driver training, and more.”

“Richmond has long been committed to energy use reduction through innovation and conservation,” said Richmond Mayor, Malcolm Brodie. “Our Green Fleet program provides tremendous benefits for our community including reductions in greenhouse gas emissions and fuel costs.”

Greening a fleet is easier said than done. For the City of Richmond it was especially challenging. “We have so many different pieces of equipment from excavators to backhoes to dump trucks to electric vehicles to pick-up trucks, you name it,” Kube- Njenga says. “So we can’t simply go to a dealership and find the answer. We have to look for technologies and answers from a broad range of sources. We have to look at it differently that other fleets do.”

Despite the challenges, the City has managed to find ways to consistently green their fleet. In fact, the City of Richmond Fleet Operations Department took several key steps: adopted a green fleet plan; implemented better tracking and analysis of fleet data, including data on fuel use; “right-sized” the fleet in all vehicle classes (light, medium and heavy duty) by choosing more efficient vehicles suited to the task; trained staff on fuel management and fuel-efficient driving practices; and replaced vehicles when due for replacement, to minimize repair costs and fuel use.

The department has installed 10 electric vehicle charging stations across Richmond. It is also now retrofitting some vehicles with solar panels; supporting an interactive anti-idling campaign; piloting GPS use to manage fuel consumption; and supporting and using car-sharing services.

“We’re also growing our EV charging infrastructure,” Kube-Njenga adds, “with the goal of adding plug-in electric vehicles, including pick-ups. We hope they’ll be available on the market soon.”

Even though the City already enjoys Platinum status, they continue to work toward being even greener, and for good reason. “Not only do we have to reduce our emissions by 2020,” Kube-Njenga explains, “but we want further reductions by 2050.”