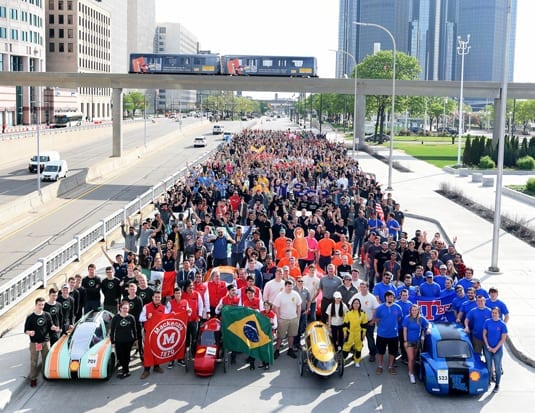 The Université Laval of Quebec team has come out on top as winners of the 11th annual Shell Eco-marathon Americas competition, which took place over the weekend in Detroit.

Université Laval defeated 114 rivals vying to see whose vehicle could travel the farthest distance on the equivalent of a gallon of gas. Runners-up were Brigham Young University (Utah) and Mater Dei High School (Indiana).

This is the fourth time, and the second year in a row, that the Quebec team has won, recording 2713.1 mpg (0.09 L/100 km) with its ultra-energy-efficient gasoline powered prototype vehicle.

The top performing UrbanConcept Americas teams earned the right to compete in the Shell Drivers’ World Championship Regional Final—a competition for the best UrbanConcept category teams to find out who is the fastest energy-efficient driver. The three regional winners will compete amongst winning teams from Asia and Europe, later this month in London, in the Drivers’ World Championship Grand Final.