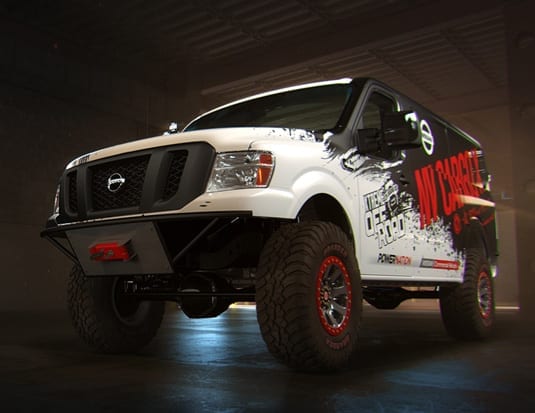 The Nissan NV Cargo X project vehicle is the most extreme version of the NV Cargo van Nissan ever created. It stands over seven-and-a-half feet tall on 37-inch tires and is powered by a Cummins 5.0L V8 Turbo Diesel transplanted from a Nissan TITAN XD.

“The Nissan NV–Cargo and Passenger van configurations–has the durability, quality and reliability that works hard for business applications,” said Fred Diaz, division Vice President and General Manager, North America Trucks and Light Commercial Vehicles, Nissan North America. “We thought it would be interesting to take an NV Cargo to the extreme–pushing it to where no cargo van has ever gone before. We weren’t disappointed.”