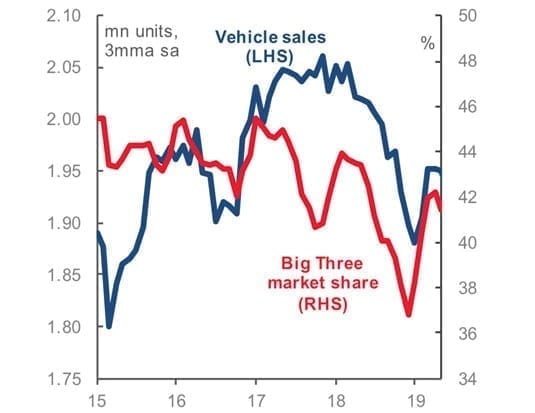 Young points out that financing costs may have provided some headwinds with the ten-year government bond elevated for most of October—and on par with September’s peak—relative to the summer lows that spurred accelerating sales.

In her monthly Auto News Flash report, Young adds a bit of silver lining to the numbers. “Base effects may be obscuring some modest strength in this month’s sales figures as last October’s sales stood out as the only (relatively) decent month in an otherwise very challenging Fall of 2018. This month’s seasonally adjusted selling rate in fact picked up by 4.5% m/m (at a pace of 1.95 mn saar units), providing some symmetry around high month-to-month volatility.”

Global Automakers of Canada (GAC) is reporting that Canadian auto sales slipped  1.0% in October, compared to almost 4% in September. The decline was led by passenger vehicles that fell 16% while truck sales rose 5%.

Truck sales also represented 76.1% of the new vehicle market in October. “Two thirds of the Global Automakers of Canada members had sales growth in October,” said David Adams, President, Global Automakers of Canada. “Light vehicle sales are over 1.6 million vehicles – which used to represent a very good total calendar year sales volume, so things are slowing down, but it is not drastic.”