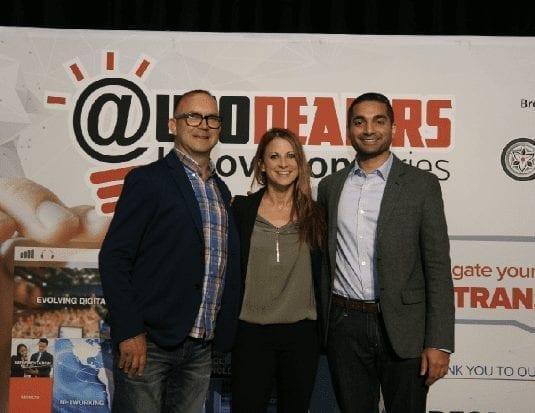 Understanding how to elevate your digital marketing to the next level was a key takeaway at this September’s events.

On September 24 and 25, the Trillium Automobile Dealers Association (TADA) once again hosted its Auto Dealer Innovation Series (ADIS). Taking place in both Ottawa and Toronto, the event featured a roster of top caliber keynote speakers, as well as a range of on-site industry vendors and plentiful networking opportunities as well as breakfast and lunch.

These events have become a staple part of the automotive retailing calendar and at each location, attendees got the chance to hear up-to-the minute and fascinating information, all designed to help dealers and their staff take their business to the next level.

Kicking things off this time around, was Christopher Vessey, Director of Partnerships for Microsoft. In Breaking Barriers through Digital Transformation, Vessey talked about Artificial Intelligence and Machine Learning, aiming to address some of the fears surrounding the discussion on AI.

Getting back our time

He said that when investments in such technologies are good, it allows us as humans to get much of our time back by eliminating mundane tasks from our daily lives.

Vessey also discussed ways to solve the transportation problem, namely, how to combat growing congestion via increased vehicle connectivity and autonomous features. He pointed to U.S. statistics that reveal $3.1 billion annually in fuel costs is wasted due to congestion and that the average person spends 38 hours a year stuck in traffic. He referred to some of the investments both tech giants and startups are investing in mobility and some of the strategies being developed by legacy automakers. These include a major focus in ramping up electric vehicle development and faster ways in which to design and bring vehicles to market, such as the partnership between Ford and Microsoft’s HoloLens augmented reality technology.

Specifically focusing on the automotive retail environment, Vessey discussed Microsoft Advertising and ways in which dealers can optimize click throughs on Bing and Yahoo search engines. He noted that the audience is typically an older demographic, well-educated, more receptive to advertising and approximately 81 percent of them are in the mid to high-income range—in other words an ideal demographic for dealers to target.

“There is a great opportunity for dealers to work with Microsoft Advertising at the Tier 1 (OEM level), Tier 2 (Regional retail) and Tier 3 (local retail) levels,” he said. Vessey noted that first party leads are still the most valuable when it comes to digital marketing and that new, immersive, interactive technology that allows dealers to showcase their inventory online can make a big impact on the ultimate sales outcome. He noted that one way was to beef up the traditional online vehicle search by embedding imagery and videos within traditional text ads.

Vessey said that this incorporating of imagery and video into search is a “huge opportunity for local dealers to capture first party leads.”

Given the power that video can provide, the next session, from Ryan D’Mello, Automotive Lead at Google Canada, talked about optimizing YouTube to improve organic success, as well as drive leads and action from your videos, plus some creative best practices dealers can develop based on analyzing consumer behaviour patterns.

D’Mello shared an example where one dealer, David Auto, a Chrysler dealer in the Pittsburg area has seen a 22 percent increase in overall store traffic and 37 percent increase in overall profits due to its YouTube strategy. Closer to home, he also refered to Brantford Kia, another dealership that through simple, well thought out videos, is seeing a huge boost in sales and revenue.

He noted that with the millennial generation—those born between 1981 and 1999 – dealers need to understand that optimizing online search tools to cater to the needs and desires of this demographic is critical. “This buyer group and their behaviour is not going away,” said D’Mello.

He said some of the biggest things for dealers in being able to establish an effective YouTube strategy is to answer key questions, optimize content to your specific YouTube channel and adding value. “Think about responses to your customers,” he said. “How much would you value them with a little more info than just price and availability?” Examples he cited including adding links that feature vehicle reviews, both from the dealer and also third-party OEM video reviews from media sources, as well as comparisons between different vehicles the dealer sells and providing a call to action, whether it’s embedded in the video, or a link sent via email.

For dealers that might seem bewildered by all this and might feel they don’t have the time to invest in creating their own specific content, D’Mello also talked about developing simple Bumper YouTube ads and working with third-party online creative services to help them scale their YouTube presence.

D’Mello noted however, that the videos that ultimately work most effectively are those that have original, engaging content. “Dealer videos that were 7.3 minutes long have a higher completion rate than those that are shorter,” he said, referring to a study by Nielsen Ratings.

Ultimately, he said the reason for adopting YouTube is that it helps breakdown the traditional barriers between dealer and consumer and by leveraging the video channel as an extension of the sales floor the results can be spectacular. “Customers are comfortable and active on YouTube,” he said, noting that almost half of all YouTube videos convert to customer action at the dealership.”

Rubinstein noted that 80 percent of Instagram users follow a business on the platform, while on Facebook, 76 percent of users are active with the average person logging in 12-14 times per day.

“When you build your social media strategy, build it for the majority of your consumers, not the minority,” she said.

Rubinstein said dealers should learn to take advantage of tools such as Facebook Manager that can allow them to track how much money is spent on social media marketing even breaking it down to individual stores within dealer groups.

Rubinstein stressed however that it was important for dealers to understand those consumers they are targeting in terms of behaviour and interests, giving them a greater chance of making the connection and for generating conversions from social media leads. A good strategy, she noted is that when a consumer contacts the dealership requesting information, the dealership staff can follow up by assessing the consumer’s profile on Facebook and then responding by providing a list of questions that will most likely result in the consumer engaging with them. “The key she said, especially for female shoppers, is to tell them more, because often they love to talk.”

She also stressed it was important for dealer staff to note how the consumer wants to be contacted whether it be by phone, email or text and the time/day they wish to be contacted.

Even for those consumers that say they were not looking to buy just yet, being able to ask the right questions and generate a conversation can break down barriers and increase the probability of a sale. Rubinstein noted that while it was good to create an effective social media strategy, at the end of the day, she said that ultimately, “your sales process and people are your winning formula.”

Au talked about how the digital universe and the actual universe are joining together and the millennial generation is proving to be the catalyst for that change.

Yet he was keen to emphasize however that it’s important to understand that technologies such as machine learning and AI should be viewed as an enabler not a solution and that in many organizations today, customer focus has become such an obsession that employees are often neglected as a result.

Au said that in specific reference to millennials, savvy organizations are able to harness common traits such as a belief in transparency and what he deems an entrepreneurial mindset—in other words they act like owners of the organization as opposed to just being employees.

“Those organizations that are thriving today are the ones that have a higher percentage of staff with an ownership mindset,” he said.